In 1995, two Danish filmmakers by the names of Lars von Trier and Thomas Vinterberg got together and decided to do the most Danish thing possible, which was to write a manifesto about film making.  The Dogme 95 Manifesto (which roughly translates to “The Manifesto of My Dog”) detailed a new philosophy of film, which wasn’t really all that new because it was largely just French New Wave on steroids.  Once the manifesto was complete, von Trier and Vinterberg followed up by doing the second most Danish  thing possible, which was to use government subsidies to fund films based on their manifesto.

This is the third most Danish thing possible.

Along with the manifesto, von Trier and Vinterberg developed a “Vow of Chastity”.  I am tempted to list the restrictions imposed by the Vow of Chastity but there are  10 or 11 of them, depending on how you read them, and they all work towards the same goal. Dogme 95 seeks to strip film down to the mere act of capturing light and sound on 35mm film, and remove all other trappings of cinema.  No period pieces. No genre films.  No special effects. No non-diagetic sound. No props. No fancy lenses, placed lighting, or even tripods.

Without tripods, the Dogme 95 adaptation of War of the Worlds told the story of a day-long picnic on the lawn of the Moesgård Museum.

I don’t know how in the mid-1990s a couple of talented filmmakers could have stumbled into the trap of Realism that other art forms had clawed their way out of decades, if not centuries, before.  A backlash against mainstream cinema was understandable, but Dogme 95 didn’t just throw out the baby with the bathwater.  It launched every other baby on Earth into the sun and boiled the oceans in the hopes that bathwater could never be created again.

If I let myself, I could probably write this entire post about Dogme 95.  As theory and thought experiment, it’s an interesting set of concepts.  But like raising a child for eighteen years without human contact to see how their mind develops in a vacuum of language, Dogme 95 is better left to theoretical discussions and never applied in the real world. It constricts a filmmaker from using the massive potential of film as an art in the name of achieving objective realism.  In the realm of video games, I’ve mentioned in my reviews for Brunswick Circuit Pro Bowling and Sensible Soccer that I don’t think that absolute objective realism is a noble goal.  The same is (mostly) true of film, and I think at least Lars von Trier has come around on this point of view based on the last decade or so of his films.  Just off the top of my head, the only part of the Vow of Chastity that Melancholia follows is that it is shot on 35mm film, and if Dogme 95 were written today I can almost guarantee that it would require the use of digital video rather than film.

Okay, let’s face it, they were probably just doing the fourth most Danish thing possible: trolling the shit out of everyone.

But what does any of this have to do with sports video games?

In 1998, 3DO released High Heat Baseball for the PC.  3DO is probably better known for their ill-fated console, the 3DO Interactive Multiplayer, rather than their later publishing efforts.  And there’s a good reason for this.  The 3DO console had all sorts of problems, but it was an interesting attempt to jumpstart the CD era of gaming, as well as an experiment in console funding that sought to undercut the licensing fees of Nintendo and Sega.  The games published by 3DO following the console’s failure were almost universally bad.  Remember Cubix?  Battletanx?  GoDai: Elemental Force?  So many Army Men games that the words “army” and “men” stopped having any meaning in the years between 1999-2002?  The only really good games that 3DO published were Might and Magic titles acquired from New World Computing and, of course, the High Heat series. 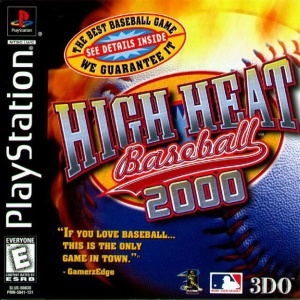 Sadly, in 1999 the naming conventions of video game websites and publications reached their zenith with GamerzEdge and we will never see those halcyon days again.

High Heat Baseball was a mixed bag upon its immediate release.  It had the unfortunate distinction of arriving in the wake of the early Triple Play games published by EA.  By the end of its life, the Triple Play series became something of a joke, but ’97 and ’98 were absolute revelations in sports game presentation and features.  They didn’t play the best, and they were plagued by Early Playstation Graphics Syndrome but at the time they were absolutely something special.  That wasn’t the only thing working against 3DO, though.  Just months before High Heat, Acclaim released All-Star Baseball 99 for the N64.  Like Triple Play, All-Star Baseball 99 looks so dated that it might as well be carrying a beeper.  But, again, at the time it was amazing.  You wouldn’t believe it from looking at it today, but the graphics outclassed anything on the market.  See also NFL Quarterback Club for the N64.

So the odds were stacked against High Heat Baseball and it honestly didn’t do itself any favors.  It didn’t have flash or glitz.  The learning curve was far more drastic than the pick-up-and-play Triple Play franchise.  It was missing the management aspects that were present in the Hardball series, and that’s without getting into the very early days of the Baseball Mogul franchise.  But High Heat did have one thing going with it: beyond the graphics, beyond the menus, and beyond the half-hearted presentation, it played a game of baseball better than anything on the market.  The variety of hits was unparalleled.  The AI was better than the competition. The interface was simple, but it produced results that felt like baseball.

Except I refuse to believe that Kyle Farnsworth ever threw a pitch slower than 90 mph.

All of the good High Heat Games (read: not the early Playstation ones) had one thing in common: they played great and they looked terrible.

We have replaced Scott Rolen’s forearms with tied-off socks full of oatmeal. Let’s see if anyone notices!

This brings us full circle, back around to Lars von Trier, Thomas Vinterberg, and Dogme 95. Even fans of Dogme 95 would have to admit that it produces ugly cinema. 35mm film is finicky stuff and it doesn’t always play nice with natural sources of light. And that’s without even getting into capturing sound or lack of music or any number of restrictions that makes Dogme 95 films rather somewhat unpleasant.

C’mon, let’s be honest, you have to be a little autistic to understand this interface intuitively.

Nevertheless, the High Heat philosophy comes from the same place as the Dogme 95 philosophy: strip out the extraneous production value, focus on the fundamentals.  The broadcast presentation of Triple Play or the “high resolution” of All-Star Baseball don’t lend anything to how their relative games actually play.  And, I suppose if you want to be reductive about everything, visual effects, props, lighting, and any number of other things don’t truly lend anything to the storytelling of a film.  If a stage play can convey a story, then a film can do the same without all the trappings of a film.   Rogue is playable on an ASCII terminal and a lot of people have spent a lot of time playing as an @ symbol in a field of punctuation.

Well thanks to this game I just remembered Chuck Knoblauch’s career and got really depressed.

Of course, like Dogme 95, High Heat Baseball didn’t last. This wasn’t the fault of the High Heat developers.  3DO went under, and if anyone is to blame it is the people behind those god damn Army Men games.  Even if High Heat was a huge fiscal success–and it wasn’t–it couldn’t possibly be enough to keep the entire publisher afloat.

But that’s not to say that High Heat and Dogme 95 didn’t leave their marks.  The echoes of Dogme 95 can, naturally, be seen in the later works of von Trier and Vinterberg.  But also in the later work of Harmony Korine, an American and one-time Dogme director himself, and mainstream/indie crossover master Steven Soderbergh.  The minimalism is tempered with the ridiculous rules falling by the wayside.  Meanwhile, Sony’s MLB: The Show has felt largely like a spiritual successor to High Heat, providing realistic scores, impressive hit variety, and a brutal learning curve.  But for The Show, good game play doesn’t come at the cost of  washed-out colors, marionette players, and presentation that never quite left the original Playstation era.  The Show has been a fantastic success, reviewing consistently well and selling better than a console-exclusive sports game should.   More than that, it’s become one of the best reasons for baseball fans to continue to buy Sony hardware.

Maybe the lesson is this: spectacle isn’t everything, but strip it away and you’ll see that it can be pretty important.