My Latest, Echoes of the Fey: The Last Sacrament, Is Out Now

This blog has been pretty dead for awhile, and a big reason for that has been all the work I’ve been putting into my latest game with Woodsy Studio, Echoes of the Fey: The Last Sacrament.

The Last Sacrament is a follow up to Echoes of the Fey: The Fox’s Trail, which we released two years ago on PC and last year on PS4/Xbox One.  It’s a sequel of sorts, though we designed each installment in the series to be playable all on its own. You play as Sofya Rykov, a private detective in a fantasy (vaguely steampunk, without the Victorian elements) world of magic, Elves, and so on. The idea of blending detective and fantasy fiction is one I’ve wanted to play around with for awhile, and Echoes of the Fey finally gave me a good excuse. We’ve also deliberately tried to develop a fantasy world that is different from most, specifically trying to avoid the way fantasy typically embraces the bad gender/sexual politics of the real world when it doesn’t have to.

In The Last Sacrament, Sofya is blackmailed into a dangerous job to steal the ingredients of a sacred religious rite from the powerful Krovakyn Church. But that’s not her only job. She’s also been hired to protect the Emperor’s daughter (who happens to be her former childhood sweetheart) from would-be assassins during a visit to the border.

The Last Sacrament is a much bigger game on a more complicated engine. A year and a half ago, we moved from Gamemaker Studio to Unreal Engine 4, which prompted us to (basically) remake all of our assets and environments in 3d. That’s been a lot of work! So has designing a tabletop RPG inspired mini-game, RiftRealms, to break up the visual novel-style sections. But the game is now done and out on Steam!

Echoes of the Fey Greenlight Campaign and Update

I’m happy to announce that yesterday we officially launched the Steam Greenlight campaign for Echoes of the Fey: The Fox’s Trail. If you want to check that out (and vote yes!) the page is here. We’re hoping to be able to release later this summer simultaneously on all PC platforms, but Greenlight is a mysterious black box so fingers crossed! 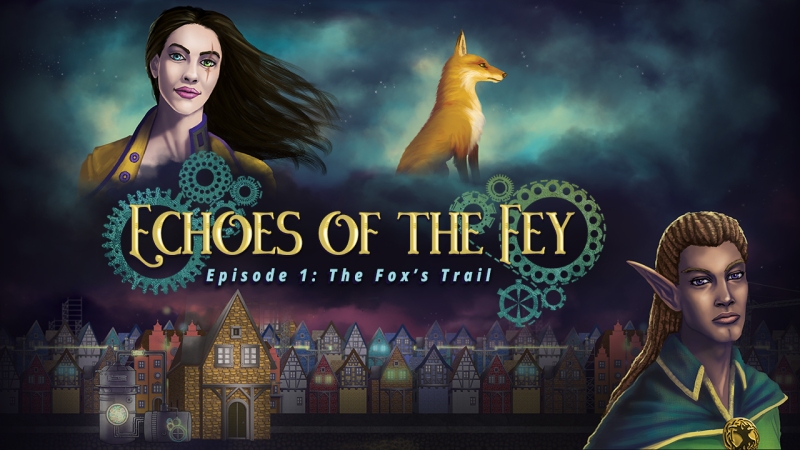 We touched on our progress in the Greenlight page, but I thought I’d give a bit of a wider picture the current state of development. Our engine (the framework we use to put in scenes, GUI elements, items, and choices) was completed–except for some minor polish–several months ago. We’re using GameMaker Studio for the first time, so this was a fairly significant step. GameMaker can work for pretty much anything 2d, but it’s not hardwired for a lot of text input/drawing. Once that was done, we were basically just been working on content–writing, art, music, and the such–for a while. Of course, that’s what people come to visual novels for.

As of today, the script is basically done. And almost all of it is in the game. You can play through from beginning to end and pretty much the only thing you’ll miss out on is the end of one side quest and the optional epilogue scene with a character of your choice. The soundtrack is finished except for some polish on a few older songs and a vocal song that will play over the credits. We’ve received but haven’t processed/put in all of the voice acting (that’s actually a very late step in development because when we do that we have to fork off a new branch of development for the mobile version, which will have significantly less voice work).

All the character portraits are complete and in-game. The only thing left to do on them is optional dyes for Sofya’s outfit, which will be rewards for getting gold pieces from side quests. Backgrounds and the overworld are mostly complete. One building that’s part of a side quest isn’t fully interactive yet, but that’s about it. Several CGs are complete and in the game, but there are more to do. And of course there’s testing! With over 100 choices in the game, testing will be something of an ordeal but (of course) we’re going to do it to make sure we launch as bug-free as possible.

I also promised a short story prequel and that’s started but I definitely need to get to work when I have the time (thanks, Overwatch). We’re hoping to be ready in the next month, then take a couple weeks to focus on marketing and release in the very near future! Of course I’m being completely vague about release dates because (especially with a two person team) things happen and I really don’t want to set a date then miss it.

In the meantime, follow development over at the new official twitter for Woodsy Studio, and just in case you missed it before, vote for us on Greenlight!