Today I started playing International Cricket 2010. I also started to finally understand cricket. And you know what? Cricket is fucking awesome.

A disclaimer before I continue: I’m going to try and explain cricket, as I see it, as part of this post. I might make some really terrible mistakes. I’m still only just learning about it and the primary medium I’m using is a video game. Nothing I say about the game of cricket should be taken with any authority. It’s very likely that my attempts to describe it will be dead wrong. But if what I say sounds cool, then you should take some time to learn about cricket. Hell, you should do that anyway if you like baseball.

With that out of the way, I can start talking about my cricket video game experience.

First of all, International Cricket 2010 is a game published by Codemasters. That might mean something to you. Probably not. If you have heard of them, it’s probably in the context of early 90s Micro Machines games, the Dizzy platformers, or Operation Flashpoint. They’ve tended to focus on publishing a certain sort of game: high on realism, low on presentation. Their games are ugly, but they carry a certain gravitas with regards to their subject matter. Hell, if I ever decide to learn about F1 racing, their F1 2010 title is apparently the be-all and end-all of the genre. International Cricket 2010 is basically what you’d expect from a Codemasters game. Boring interface, ugly graphics, but controls well and is clearly reverent of the sport.

Onto cricket. I started out the only way I knew how: the tutorials. The game had extensive tutorials on batting and bowling, which was quite fortunate because I didn’t understand either.

The tutorials were incredibly boring. Even worse, the instructions were ridiculously obtuse. Just to give an example, I took a picture of my screen. Yeah, amateur stuff, I know, but there’s no other good way to capture from my PS3 when I’m playing a European game: 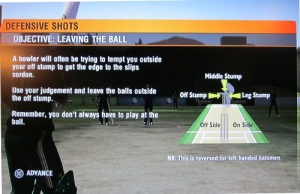 Obviously this made no sense to me, so I failed this tutorial several times. Then I looked for clearer instructions within the game and found the following:

I’m not even sure I want to address this. “Leave two balls aimed at the player’s off stump”? I don’t think that kind of talk would be in a game rated appropriate for children in the United States.

After a few minutes of snickering at the language, I realized what the game was trying to tell me. Essentially, sometimes bowlers in cricket throw terrible bowls that the batter should just take. It’s basically like taking a ball in baseball, except it happens less often (which will be explained later).

So I plodded through the tutorials, all of which tried to explain the rules and strategy of cricket in similarly obtuse fashion. I began to understand it.

I’ll try and start at the beginning. In baseball, there are innings, outs, strikes, and balls. If you’re reading this, you know there are three strikes to an out, three outs to an inning, nine innings a side. With cricket, there are balls, overs, and innings. There are six balls to an over, and innings continue indefinately until one of the following criteria is met:

1. 10 out of 11 batters in the lineup are dismissed (they make an out)
2. The specified number of overs (usually 20 or 50) have been completed
3. The Batting team decides to end the innings.

To put this in baseball terms: In order to end an innings, the bowling team must retire almost everyone in the lineup. That’s basically 10 outs. To make matters worse, the first two batters get to bat until one of them makes an out. Then the third batter takes his place. And so on. To top it off, making an out is a lot harder in cricket than in baseball. So an innings takes a long fucking time.

In fact, it’s honestly helpful to forget any similarity between baseball innings and cricket innings. They aren’t the same. In a test match, which literally takes days to complete, there are only four innings. Each side gets two. Two innings per side equals almost a week’s worth of cricket.

Because of this, cricket is a high scoring game. Expect numbers in the hundreds.

Now, I’m sure everyone is wondering why the first two batters get to bat until one of them gets an out. And that has to do with yet another major difference between cricket and baseball. In cricket, there are essentially only two “bases”. They are not called bases, and they are not indicated by felt pillows. They are “wickets” and they are represented by a series of three sticks (stumps) in the ground. The batter (or batsman) stands at one of the wickets and receives the ball from the bowler. Another batsman stands at the other wicket, so its essentially as if there is always someone on base.

The bowler delivers the ball and the batsman swings. Whether or not he makes contact, the ball is considered in play. Both batsmen can attempt to score runs by running between the bases/wickets. And they can do this as much as they want, until the fielding team returns the ball. If the ball strikes the wickets before a batsman scores a run, the batsman is dismissed. And that’s a really bad thing.

What’s interesting is that the batsmen/runners don’t have to try and score a run. If the batsman hits a soft grounder back at the bowler, they can both stay put. It is considered a ball (which is 1/6 of an over) and if there are limited overs this is still a bad thing. But it’s better than being dismissed.

This is maybe my favorite part of cricket. The batsmen have to decide how many runs to try and score. If they push it, one of them is dismissed. Imagine if when a batter in baseball hit a slow roller to the 2b, he could decide to stay put and try again. That’s cricket. There is actual strategy on offense. There’s actual strategy on defense, too, but I’ll probably address that in my next post.

Essentially here’s what happens: there are two batsmen at two wickets(bases). The bowler delivers the ball. The receiving batsman hits it. It rolls or flies to the fielders. If a fielder catches it outright, the batsman is out. But if the fielder does not, the two batsmen must decide whether to try and score runs by running between the two wickets(bases) before the fielders can return the ball to the wickets. If one of the fielders hits the wickets with the ball before both batsman are safely behind the “crease” or line near the wickets, the batsman/runner is out. If they stay put, nothing particularly bad happens, though the over continues on.

A couple of addendums: if the ball is hit, strikes the ground, and then goes out of play it counts as four automatic runs. This is like a ground rule double. Due to the way fielders and stadiums are configured in cricket, this can happen on a ground ball. If hit hard enough, a ground ball can leave the field of play and count for four runs. If the ball is hit and goes out of play without touching the ground, it counts as six automatic runs. This is like a home run.

The best way to look at cricket on offense for a baeball fan:

Next time I discuss cricket, I will talk about bowling and defense and try to tie it together with the lessons of this post.