Experiences In Old Sports Games: Mario and Sonic at the Olympic Games

I’m not sure if there is any subset of the sports video game genre more maligned than the Official Video Games of The Olympics. Football games may be stale in the age of Madden. Wrestling titles may be gloriously dumb. Horse racing games may be completely impenetrable to everyone except one Japanese kid who does nothing but watch VHS recordings of triple crown races. But none are as bad as video games based on the Olympics. No matter who develops them, they are always buggy, awful looking messes with controls that range from awkward to borderline war crimes.

I was just thinking that there weren’t enough video games about shooting guns.

The exception to this rule is Track and Field, an arcade, home, and Game Boy classic.  Even Track and Field is merely good for its time. It has held up about as well as an NES controller used to play Track and Field. Like all video games based off the Olympics, it was nothing more than a minigame collection with frustrating input issues. Unlike the games that came afterwards, however, it at least had decent graphics and didn’t feel rushed out the door to beat a close deadline and make a fast buck.

There has been an Official Game of the Olympics for twenty years now and they have all been terrible. The license has been passed around to a number of developers, starting with U.S. Gold, which somehow is neither a United States company nor a company specifically formed for releasing video games based on the Olympics.  U.S. Gold had released a number of unlicensed Track and Field-esque games prior to acquiring the license, and produced official Olympics games from 1992-1996. For the 1998 Winter Games, the license was picked up by Konami, makers of Track and Field, who promptly squandered all their good will with Nagano Winter Olympics ’98. I actually played Nagano Winter Olympics ’98 for the N64 and as a result I am a carrier for a previously unseen form of hepatitis. 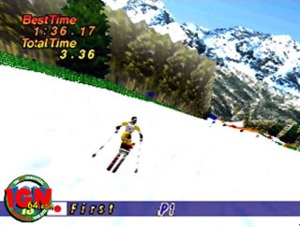 There’s NagaNO way I’m going to play a game with graphics like this again.

Eidos took over the license for the 2000 and 2002 games, and farmed out development to Attention to Detail, a studio best known for Cybermorph for the Atari Jaguar and for stretching the meaning of the phrase “best known for” to its absolute limit.  After Eidos came Eurocom, which has a track record of remarkable mediocrity for a number of decades. They couldn’t solve the Olympics Video Game problem, so 2k Sports took a crack at it in 2006.

Despite the publisher pedigree, Torino 2006 was particularly godawful. Development returned to Eurocom, now under the banner of SEGA for 2008 and 2010.  Finally, the license was farmed out to SEGA Australia for London 2012, which won a gold medal for being damned with faint praise as various websites called it the best official Olympics title but still gave it middling-to-poor reviews.

This image is a good example of how male and female athletes are objectified in different ways but I’m too distracted by the hideous logo of the 2012 Olympics.

Along with its predictably terrible standard Olympics video games, SEGA actually did something interesting with the license and developed a second series of titles exclusively for the Nintendo Wii and DS. Leveraging the legacy and long history of SEGA and Nintendo, in 2008 they released the first Olympics game that could actually get anyone excited about an Olympics game: Mario & Sonic at the Olympic Games. 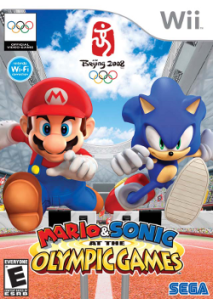 Jumping hurdles in denim overalls? Really? This is why the Chinese don’t take Americans seriously.

Of course, people weren’t excited about yet another sports-themed minigame collection on the Wii, they were excited because this title represented the first crossover between the universally-beloved Nintendo mascot, Mario, and the still-beloved-on-parts-of-the-internet-I-avoid SEGA mascot, Sonic the Hedgehog. For years, Mario and Sonic had been virtual rivals of a sort, as they starred in the flagship games on Nintendo and SEGA platforms. Putting them in the same game was a landmark event for people who care too much about video games. There was even a sort of thematic relevancy to the mascots joining together in an Olympics themed game, as the Olympics have often served as a kind of neutral ground, where geopolitical enemies can meet up and engage in peaceful competition.

For a notable exception to when countries did not put aside their differences, see the 1980 Moscow Olympics co-sponsored by Atari.

First off, as we all know, Sonic the Hedgehog represents death. He always has. There’s no reason to re-examine that point, as it was so eloquently proven in the acclaimed 2009 article “Gotta Go Fast: Sonic, Tails, and the Rapid Approach of the Inevitable End”.

They say that it is certain that “death” comes. They say it and overlook the fact that, in order to be able to be certain of death, Da-sein itself must always be certain of its ownmost nonrelational potentiality-of-being not-to-be-bypassed. They say that death is certain, and thus entrench in Da-sein the illusion that it is itself certain of its own death. – Sonic Adventure 2, quoting “Being and Time” by Martin Heidegger

With that out of the way, let’s examine the core concept. Mario, a rotund Italian man, is set to compete in a series of athletic events against Sonic, a anthropomorphic hedgehog whose defining attribute is his running speed. Granted, over the past few years Mario had found himself participating in a number of sports–golf, tennis, baseball and basketball–but he’s really no match for Sonic at any Olympic activity that requires speed or agility. This is an analogy to the growing disparity between Japanese and “western” game industries.

Mario represents the Japanese game industry. At one point he was the biggest thing in the world. Mario games were the gold standard of console titles. Now, he’s doing the same thing he’s always done but found less success in a more competitive, broader world. There are still plenty of great Mario games, and great Japanese games, but they’ve been overshadowed and the business model hasn’t caught up with the rest of the world. 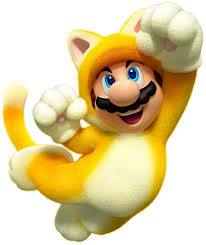 And now like Japanese games, everything in Mario has cat ears.

Sonic, on the other hand, represents the western game industry. I realize “western” is a somewhat senseless distinction founded in sketchy outdated categorization, but off the top of my head I can’t think of a better term for the parts of the game industry scattered about North America and parts of Europe. Sonic was a character designed to appeal to audiences in these “western” territories. His character aesthetic and especially his “attitude” is founded in what adults thought American boys liked in the 1990s. The same can be said of a large portion of the western game industry, which has thrived despite (or perhaps because of) an obsession with continuing to blatantly pander to the tastes of American boys. Of course, as someone who purchased both the new Call of Duty and Battlefield games, perhaps I’m just hurling rocks straight through the walls of my glass house.

I don’t even know which Call of Duty game this screenshot is from and I have played all of them since Modern Warfare.

Of course, Mario and Sonic aren’t the only playable characters in the game. A variety of faces from both franchises make up the roster of playable characters.  Now, to anyone who has played at least one spinoff Mario game, all the Nintendo choices will be recognizable. Mario has built up a regular supporting cast over the last decade-plus and they’re mostly inoffensive.  But take a look at the SEGA side and suddenly everything gets confusing.  Sonic, Tails, Knuckles, Robotnik/Eggman and then shit starts to get dicey.  I had to go to the List of Sonic the Hedgehog Characters Wikipedia entry to figure out who any of the other strange animals were. And let me tell you, it is absolutely terrifying how much effort has been put into the various Wikipedia entries for Sonic the Hedgehog characters.

Waluigi is the least legitimate Mario character on the roster and if you don’t think something as ridiculous as Waluigi deserves to stick around you can just get out.

On one hand, the diverging paths of the Mario and Sonic series, which led to a mostly reasonable cast of Mario characters and some very questionable decisions regarding Sonic characters, seems to undermine the theory that the two are counterposed  representing the Japanese and Western game industries.  The Sonic series has gone off of the rails, and by that I don’t mean that SEGA is considering a Sonic/Train Simulator 2014 crossover entitled Sonic Derailed.  Though if you told me that was a real game I would probably believe you.  Sonic introduced a dumb as hell antihero called Shadow the Hedgehog, started Dragonball-style super saiyan bullshit, gave Shadow his own game with guns, had a hedgehog/human romance for some terrible reason,  released a Bioware RPG, and then Sonic became a werewolf because there was no way to dig the hole the series was in any deeper without striking werewolf coal. Meanwhile, Mario is still going relatively strong.  Cat Mario notwithstanding.

Ultimately, though, we have to recognize that this is a SEGA game, and they probably think that Sonic is still doing perfectly fine.  Maybe in some ways it is.  I’m willing to acknowledge that Tyler Perry movies aren’t made for me, that I don’t have the patience for Kazuo Ishiguro, and that there’s a whole new era of adolescents who think they’re being edgy by watching the twenty-billionth season of South Park.  Maybe I’m just not the audience for Sonic.  Or maybe SEGA is using this game as a self-critique, realizing that it has fallen into the same dark path as so many Western developers, pandering to the point of insanity. 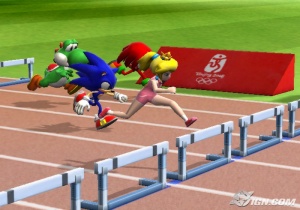 Nah, I wouldn’t make shit up. Not about Sonic the Hedgehog.