Pretending to Shoot People in the Next Generation: CoD Ghosts

Last week marked the release of the Playstation 4, and the beginning of a new gaming console “generation”.  Because I’m painfully susceptible to the consumer frenzy of a capitalist society, I pre-ordered a PS4 the day it was put up on Amazon.    And then somehow, through a series of events that I should have exercised better control over, I ended up buying all three first-person multiplayer shooters released as launch games for the PS4: Call of Duty: Ghosts, Battlefield 4, and Killzone: Shadow Fall.  Don’t judge me.  The launch lineups were weak.

Realizing that I’ll probably spend too much time playing all these goddamn shooters, and that this has become as much of a video game blog as a sports blog, I thought I’d take a look at all of the ways you can pretend to shoot other people in this brave new generation of gaming.  Starting with Call of Duty: Ghosts.

First off, a confession: I like Call of Duty.  The overwrought, dumb story lines of the modern Call of Duty games are right up my alley.  From helping a protagonist of the series detonate a nuclear weapon in the skies over Washington D.C. in Modern Warfare 2 to escaping a Russian prison and implicitly assassinating Kennedy in Black Ops to watching the Eiffel Tower collapse and then storming a resort in a bizarre mechanized suit in Modern Warfare 3, the series has always been ridiculous enough to keep my attention. When it comes to the plot of video games, I subscribe to “the stupider, the better” and Call of Duty never disappointed.

The designers of CoD Ghosts watched the trailer to Gravity just like everyone else.

But hardly anyone–not even me–plays Call of Duty for the single player campaign.  The real reason that millions of people like me keep going back to the series, year after year, is the online multiplayer.

It’s hard to explain why Call of Duty works in a way that most other online shooters don’t.  It’s nicely polished, but not terribly balanced.  The graphics left something to be desired even in the 360/PS3 era when compared to the Battlefield, Killzone, Halo, and even Medal of Honor installments on the same platform.  Assets are re-used in every new game, and only a handful of the maps are really good.  But somehow it all comes together in a package better than all its imitators.

In Call of Duty: Ghosts, you can control a dog with a tablet computer.

Various sources of Norse Mythology tell the story of the Battle of the Hjadnings. The tale is somewhat different depending on the text, but the general details are the same: the daughter of a Norwegian chief,  is betrothed to  another Norwegian nobleman.  The two men are good friends, but something goes wrong: Loki plays a trick on them, one of them is intoxicated with a potion, or a rumor of pre-marital intimacy between the daughter and the nobleman drives them apart.  The nobleman is still in love with the daughter, even though their marriage is in jeopardy.  Because the nobleman is a character in a viking legend, he doesn’t solve this problem by sitting down and talking with the chief.  Instead, he kidnaps the daughter and takes her to an island.  Naturally, the chief gathers up his warriors and attacks the island.  The daughter meets the chief and tries to mediate because, despite the fact he kidnapped her, she still loves the nobleman.  Because the chief is also a character in a viking legend, he doesn’t listen to his daughter and starts a huge fucking battle on the island. 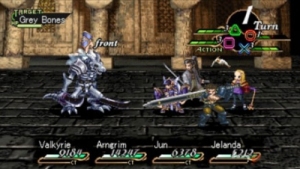 The concept of the “einherjar” in Norse Mythology draws from similar concepts, and was featured in the Valkyrie Profile series, which would be meaningful if anyone played Valkyrie Profile games.

The battle goes on all day, and many people are killed.  But at night, all the dead are brought back to life to fight again the next day. The reason for the warriors’ resurrection differs depending on the version of the tale.  In one version, the chief’s daughter brings them back with magic but can never save them.  In another, the magic that drove the chief and the nobleman apart is so strong that it keeps them fighting even after death.  But no matter the reason, the battle is destined to go on forever until Ragnarok, or  the Christianization of Scandinavia, depending on who you ask.

Call of Duty multiplayer is the Battle of the Hjadnings writ to a modern age.  Twelve players are dropped into a small battleground.  They run at each other, or hide out in a corner, or get up onto the highest platform on the map and pull out a sniper rifle, which is basically the most annoying thing they can do.  Shots are fired.  Players go down.  The killcam reveals just how things went wrong.  It’s often total bullshit.  But no one is out of the game long.  They are resurrected almost immediately to rejoin the battle.  Players rack up killstreaks, bringing in helicopters, rockets, drones, and even dogs controlled with tablet computers.  It becomes a barely measured chaos that doesn’t even begin to resemble real warfare.  It’s the mythologization of battle, always repeating until the end of days.  No death.  No real consequences.  The comparison to the eternal battles of the Norse myths isn’t something lost on the developers, either, as the top killstreaks in Ghosts are satellites bearing the names “Odin” and “Loki”.  These names also has something to do with the single player campaign but there’s a good reason I would rather ignore everything in the story:

And that reason has nothing to do with dogs keeping watch in tanks.

It’s impossible to think about the meaning of Call of Duty without examining its problematic nature. On the surface, the game appears to be a reverent ballad to militarism and unbridled war.  In some ways, the Pentagon couldn’t ask for a better recruiting tool than Call of Duty. From playing online, I know it’s immeasurably popular among middle school and high school kids. I’ve never been one to think that violent video games spark violence, as human history has been full of violent media and entertainment and the conditioning effect of that media is questionable.  But the usefulness of propaganda is clear, and it’s easy to view Call of Duty as so pro-Army that it would embarrass even Robert Heinlein.

Yeah, if you finished Black Ops you know what I mean.

This is especially true of the single player campaign in Call of Duty: Ghosts, which as usual informs the arenas and aesthetics of the multiplayer.  Prior Call of Duty campaigns were not nearly as blatant throughout.  The Modern Warfare series at least played at an anti-war message, casting the villains as the hawk generals, mercenaries, and nationalists on both sides of a U.S./Russia conflict.  The Black Ops series particular had bizarre, schizophrenic politics that seemed to jump all over the map even more than the storyline of the games themselves.  The anti-American villain of BO2, for example, is practically Luke Skywalker to a U.S. Empire.  Motivated by genuine atrocities committed against him by the U.S, he is consistently outsmarting an enemy that has every advantage over him.  His heroism is only undermined by a few brutal actions, none of which are demonstrably worse than anything the player characters have done throughout the Black Ops series. You could easily cut two–maybe just one–short scenes from the story line and turn it into an incredibly subversive piece on par with Spec Ops: The Line.

Ghosts provides nothing as interesting.  It contrives an implausible future war between the United States and a federation of South and Central American states that somehow casts America as the scrappy underdog, despite training dogs to be controlled with tablet computers.  This, of course, means that you are fighting a huge army of Spanish-speaking invaders who are pouring across the American southwest.  And its best line of defense is a massive wall that has been erected to keep this Hispanic horde from U.S. soil.  You might say that it is…borderline offensive. 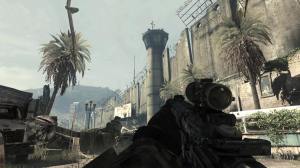 This is the literal border wall of COD: Ghosts that protects the American/Mexican border.

Even though you play as either the Ghosts or the Federation in the multiplayer, none of the truly problematic elements transfer over.  The character models are whatever the players have customized, with some modifications based on the map, and the Federation suddenly speaks American English for some reason.  Since I played a few hours of the multiplayer before I even touched the campaign, this initially gave me hope that the Bad Guys in the campaign were somehow not analogues for illegal immigrants.  Perhaps they were mercenaries trained from a young age by merciless American corporations or something.  I don’t know.  Anything other than what we got.

Even though it is devoid of the bizarre and unnecessarily inflammatory trappings of the single player campaign, the nature of the multiplayer game itself can be called into question.  Like the ancient tale of the Battle of the Hjadnings, it celebrates the glory of battle and could be read as stripping war of its innate horror in favor of high-adrenaline thrills.  If anyone joins the Army to shoot at real people because of how much they love to shoot at fake people, that’s one person too many.  The sad truth is that we’re already well past that point. 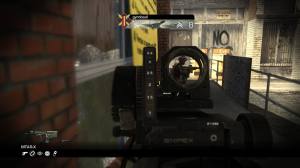 I don’t usually spend much time on this end of killcams, unfortunately.

Of course, that’s not going to stop me from playing Call of Duty.  Maybe that makes me a hypocrite.  But one of the benefits of being the audience to any media is that we can choose to interpret, or misinterpret it, as we choose.  There’s nothing I can do about the popularity of Call of Duty.  Each game will sell millions, and influence millions of people whether I play it or buy it or not.  Gamers will continue to flock to the series, like dogs under the spell of a tablet computer.  The only thing I can do is offer a different interpretation.

The Battle of the Hjadnings was a tale of eternal glory to the ancient Norse, but it was also a tale of everlasting sorrow.  It is war as a meat grinder, unconcerned with the lives of its soldiers.  It is war without meaning, repeated endlessly, with new live bodies to replace the fallen.  Even the worst chickenhawk in modern America would have to admit that the prospect of dying every day, watching your own death through the eyes of your killer,  then being resurrected to fight again is seriously fucked up.  As such, the vision presented by Call of Duty multiplayer shouldn’t be seen as anything to aspire towards.  Anyone who plays Call of Duty should realize how horrible war is, because it leads to nothing but death and computer-controlled dogs.