MLB The Show – World War K: The Candyman Can

Episode 1: The History of the First Base War

Episode 2: And We Will Always Be Royals

The first two weeks of the season for the Kansas City Royals passed with neither a bang nor a whimper.  The team was thoroughly mediocre, and after a 5-3 start, they dropped two games in a row to settle at 5-5 in their first two turns through the rotation.  None of this could be blamed on the starting pitching, however.  All five of the Royals’ starters–Strike-O-Matic, James Shields, Bruce Chen, Jason Vargas, and Kyle Zimmer–had been fantastic.  However, the lineup was struggling to produce runs.  Sal Perez, Colby Rasmus, Alex Gordon, and Mike Moustakas all had averages below .200 and their futility prevented the relative success of Nori Aoki, Eric Hosmer, Pat Burrell, and Omar Infante from bearing much fruit.

However, this was no time for the offense to be slumping.  Game 11 pitted the Kansas City Royals against their interdivisional opponent, the Minnesota Twins.  And perhaps more importantly, it pitted Strike-O-Matic against the first of the six robot masters, the deceptive hurler Stubby Candyman.

In the year 2099, the robot Stubby Candyman was the ace pitcher for the St. Paul Conjoined Twins, aptly renamed after the great Minneapolis Nuclear Disaster of 2051.  Unlike most robot hurlers, Candyman did not rely upon pure power to overwhelm his opponents.  Instead, his arm cannon was equipped with a variety of darting and dancing breaking breaking pitches.  His knuckleball was considered the best in all of MLB, as he could eject the baseball without any spin but still control its general trajectory towards the plate.  His slider, which was the hardest pitch he threw, could start at the knees of a left handed batter and end up on the far side of the strike zone.  And his vulcan change?  Well, he was the only one who even knew what a vulcan change actually was.

Candyman was not the first choice to be sent back in time to destroy baseball.  The tyrannical artificial intelligence, code name K.I.R.K.G.I.B.S.O.N., feared that the soft-tossing lefthander would be unable to impress in an era marked by 100 MPH fastballs and high strikeout totals.  Built in the mould of Armando Reynoso, Candyman would stand out in a bad way.  His offspeed offerings, designed to fool the circuitry of 2099 robot batters, might throw off the timing of human hitters at first, but they would adjust and tee off, knowing there wasn’t a fastball on the way.

To make matters worse, Candyman’s stuff was calibrated to the smoggy, smoke-filled air of the post-robot war hellscape of 2099.  Upon arriving in 2014, he found the relatively clean atmosphere impossible to handle.  Like Denny Neagle and Darryl Kile in Coors field, his pitches hung in the air like beachballs.  He put up a 7.00+ ERA in his first two starts, rocked by the White Sox and the Indians.  However, the inconsistent offense of the Kansas City Royals was just what he needed to set himself straight.

The game was over in the first inning.  Literally.  In the top of the first, Candyman’s breaking pitch re-calibration was successful and he proved that he could keep the Royals off balance.

Then, in the bottom of the inning, Strike-O-Matic started out strong.  He gave his usual 100 MPH effort and got the first two outs, but then Josh Willingham stepped to the plate.  There is a certain risk to throwing nothing but fastballs, and that risk was immediately realized.

The pitch was launched into the stands in left field and, just like that, the Minnesota Twins had the lead.

The one run was the only one that Candyman needed.  His knuckleball had the KC Royals off balance through the sixth inning, at which point he was replaced by the harder-throwing members of the Twins’ bullpen.  Barely adjusted to Candyman’s slow delivery, the Royals hitters fared no better against him.  Strike-O-Matic exited the game after the seventh, the only run coming on the HR by Willingham.  His performance was everything the team expected of him, but as anyone who has spent the real 2014 season watching the St. Louis Cardinals knows, without a single run the Royals had no chance to defeat the Twins. 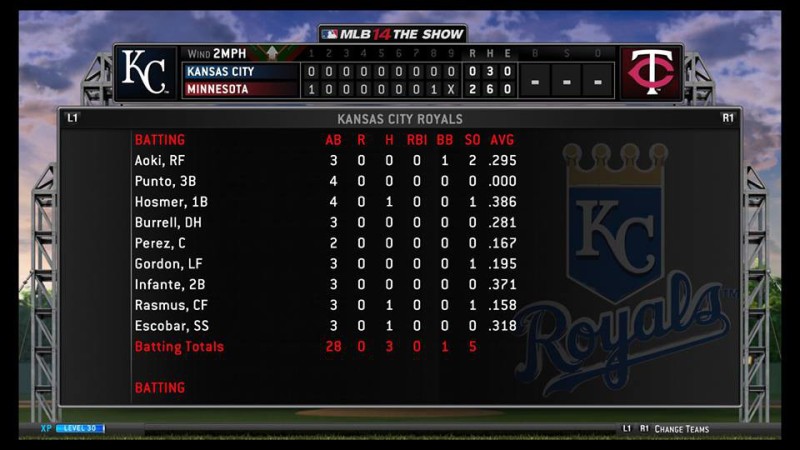 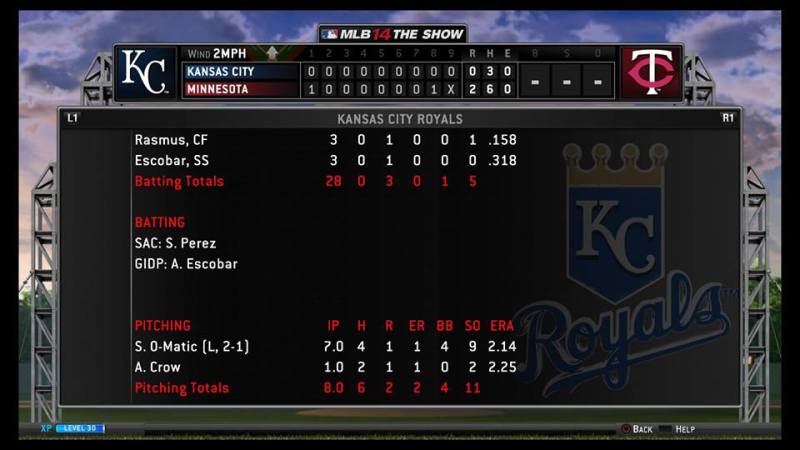 Strike-O-Matic would not have to wait long to get another chance at Stubby Candyman.  You see, in 2097, K.I.R.K.G.I.B.S.O.N. had sent back in time its first assault on Major League Baseball, a small artificial intelligence program that would be used by Bud Selig to create the MLB season schedule. This AI did dumb things, like create a schedule in which Strike-O-Matic’s next turn in the rotation would come, once more, against Candyman and the Minnesota Twins.

This time, the game would take place in Kansas City, but that was cold comfort to the Royals.  No matter how loud their fans cheered, it wouldn’t make Candyman’s pitches any easier to hit.  The Royals hitters needed to get going.  Fortunately, the scheduling AI had provided them just the chance they needed: between Minnesota series, the Royals would face the Houston Astros.

If the 2014 Kansas City Royals were a team without a direction, the 2014 Houston Astros were a bunch of dogs chasing their own tails.  Having bought firmly into a single-minded, cost-conscious analytic approach, the Astros had spent the last few years running out terrible Major League rosters while attempting to build from within.  This strategy, conducted under the auspices of GM Jeff Luhnow, was affectionately “The Process” by the new sports media.

Initial reviews on The Process were quite favorable.  Losing at the Major League level earned them several high draft picks, which they used to draft a stable of touted prospects.  However, injuries and underperforming minor league performances led to question whether all the Major League losses had been for nothing.  A few years into The Process and didn’t seem like much was changing.  The pitching, in particular, was terrible.

The Royals rolled into Minute Maid park and immediately found their bats revitalized.  Pat Burrell and Eric Hosmer each hit two home runs, and the others actually helped out the thunderous bats in the middle of the lineup.  Even without Strike-O-Matic going in the series, the Royals pitchers set down the Astros hitters, and Kansas City ended the roadtrip with a resounding sweep.

With the Astros behind them, the Royals set out for revenge on Stubby Candyman.   They hoped that a few good games would get the offense into a grove that they could carry forward against the befuddling robot master.  With a little momentum, maybe they could–

Or maybe they had a strategy.  After facing Candyman once, they realized that while it was increasingly difficult to make good contact against him, the slow speed of his pitches made it easier to foul off several in a single at bat.  Candyman was not a human and could not be tired out in the same way, but the fuel cells in his cyber-arm could be depleted.  Without sufficient time between innings to recharge, the Royals could exhaust him just like a person.

With this in mind, Pat Burrell took aside the players he knew he could trust–newcomers Aoki, Punto, Rasmus, and the simpleton Hosmer–and instructed them on the plan.  Each of them were to try and extend their at-bats as long as possible.  At best, they could tire out Candyman and make him throw up a few meatball curves.  At worst, they’d get him out of the game as fast as possible.

Of course, the plan also depended on Strike-O-Matic continuing his dominating ways.  Even a tired robot master was still difficult to hit.  The Royals couldn’t hope to get much more than a run or two.  Fortunately, Strike-O was up to the task.  He dominated from the first pitch, muscling fastball after fastball past an admittedly poor Twins offense.

On the other side of the ball, the Royals did just as Burrell and Strike-O-Matic hoped.  They stayed at the plate, wearing down Candyman with each at bat.  As the fourth inning reached its close, the robot master had thrown over sixty pitches–a far cry from his efficient  game just a week before.  The plan worked, and that’s when they broke through.  With two strikes and two outs in the fourth, the most unlikely of heroes came forth to break the dam.  And then, in the fifth, Candyman allowed yet another run in the most embarrassing way possible.

With a two run lead, Strike-O-Matic bore down.  He dominated the Twins lineup, racking up Ks and limiting their hits to just a few bloops until a solo homerun in the ninth inning.  But by then, the game was out of reach.  Strike-O-Matic finished the night for his first career shutout.  And his first victory against the six robot masters. 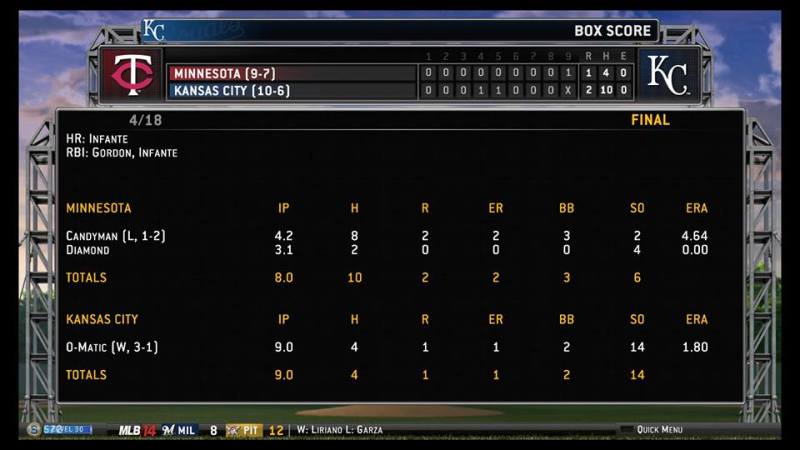 With this victory, the Kansas City Royals pulled into first place for the first time in 2014.   However,  their 10-6 record after sixteen games was only moderately better than the 9-7 record put up by the Royals in the original timeline.  This was a good start, but the season was only just beginning.

Next week, we move through the end of April and take a look around the league at how the alteration of the timeline has affected all of baseball.

2 thoughts on “MLB The Show – World War K: The Candyman Can”