MLB The Show – World War K: The King in the North

Episode 1: The History of the First Base War

The theories of the 2010s pitch-framing analysts are lost to history, purged after a reactionary movement seized sports media in 2031 and instituted the Heyman Doctrine, a brutal set of reforms that made the use of any advanced statistic less predictive than ERA punishable by death.  But we do know that these statistics informed the 2014 Kansas City Royals’ decision to acquire Jose Molina from the Tampa Bay Rays.  Molina, a month away from turning 39 at the time of the trade, could otherwise hardly be seen as a trade target for a team that hoped to save the future of baseball in 2014.  He had a career OPS hovering around the low .600s and had never received more than 350 PAs in a season.  If not for the pitch framing craze of the 2010s, why else would anyone trade for Jose Molina?

Alas, the once-great defensive catcher had succumbed to the worst possible side effect of old age.  He had become enamored with conspiracy theories and the rantings of Fox News rejects, not necessarily in that order.  This led to a decline in his already-underwhelming ability across the board.  Rather than maintain his right arm strength, he obsessed over the strength of his right to bear arms.  He didn’t care as much about pitcher ERA as he did about NESARA.  His WAR had been undermined by INFOWARS.  Maybe it was for the best.  Maybe it was time for him to retire, but unfortunately the Kansas City Royals needed one last season out of him.

With their new backup catcher, the Royals started out the month of May… pretty much how they’d played all of April.  They were inconsistent on both sides of the baseball, with a few standout performances by Strike-O-Matic, Eric Hosmer, Kyle Zimmer, and Omar Infante keeping the rest of the team afloat.  Jose Molina, even at his best, wasn’t going to help.  In his current state, he could only hope to give a few days off to struggling catcher Salvador Perez.  Perez needed the time off–or at least needed to be out of the lineup.  He had been the biggest disappointment of the season for the Royals, still only hitting about .200 with a handful of extra base hits.

Despite Molina’s own struggles, he managed to hit a bit better than Perez in his first couple weeks on a the Royals and he began to get regular appearances in the starting lineup.  Manager Ned Yost, influenced by team sabermetrician Alcides Escobar, hoped that his excellent pitch-framing skills would be enough to justify his increased playing time.

The team hoped that Molina’s pitch framing skills would be especially helpful to Strike-O-Matic, who was putting up an exceptional season already but had some difficulty limiting walks.  Strike-O-Matic could dial up his pitches to 102, and throw five different variety of fastball, but couldn’t always get any of it over the plate.

However, Ned Yost had no interest in helping out Strike-O-Matic excel.  he still hoped to see the pitching machine and his friend Pat Burrell fail.  He made sure to run out a tired Sal Perez in Strike-O-Matic’s first three starts after Molina was acquired, but that did nothing to shake the robot’s confidence.  Then, finally, Perez’s numbers sank to the point where Yost could no longer avoid pairing them up.

For the first time, Strike-O-Matic would throw to the master pitch framer, Jose Molina.  And they would match up against one of the greatest starters in all of baseball, Felix Hernandez.

Felix Hernandez was capable of shutting down most lineups, so the currently anemic Royals didn’t think they had much of a chance.  But the dominating righty faltered in the first inning, allowing three hits, a walk to Pat Burrell, and two runs.  Given Strike-O-Matic’s relative dominance, this gave the Royals a great chance to win.  There was just one thing they weren’t considering:

After hearing about the robot threat, legendary CF Ken Griffey Jr. decided to un-retire and join the Mariners as a part-time player and hitting instructor.  His hitting skills left quite a bit to desired, but there was still one area in which he excelled–being an old man and talking about conspiracies.

Griffey’s shared interest in elaborate conspiracy theories, especially those involving Seattle native Gabe Newell and his control over the U.S. president, distracted Jose Molina from his framing duties.  Strike-O-Matic left a fat pitch up for the Mariners’ CF and he yanked it to right field for a single.

Even though he was riding on ancient wheels, a walk and two sacrifices brought Griffey around to score in the first, leaving the game at 2-1 in favor of the Royals after one inning.  Based merely on that initial frame, it did not appear that this would be the pitching duel that everyone expected.  But even having lost the lead, Hernandez settled down and began to put together a start worthy of his reputation.  After giving up those initial two runs, he dominated the Royals and held them to five more scoreless innings.

Strike-O-Matic matched him pitch-for-pitch,…mostly.  Still distracted by Ken Griffey Jr’s insight into various conspiracy theories surrounding president Obama, Jose Molina’s mind was taken out of the game.  Not only did he fail to live up to his prodigious #framing reputation, he allowed Strike-O-Matic to walk seven batters in six innings.  Despite that, Strike-O-Matic persevered and limited the damage, allowing only a handful of hits in those innings and no more runs. As a result, Strike-O-Matic matched King Felix Hernandez and both starters left the game with the Royals retaining a 2-1 lead.  The pitching machine even finished his time on the mound by striking out Ken Griffey Jr., a highlight that it would remember until the carbon in its circuits decayed under the subtle pressure of time.

Thanks to all the pitches thrown in the process of walking seven batters, Strike-O-Matic had to come out of the game after he struck out Ken Griffey Jr.  He was replaced by the Royals bullpen, which had been just as inconsistent as the rest of the team.  The seventh inning went smoothly, but then came the eighth, where one bad play and one phenomenal one would define the rest of the game.

After that play, the Mariners fell apart.  Moustakas led of the next inning with a single, then was driven in on a line drive HR from Nori Aoki, which should basically never happen in a close game. 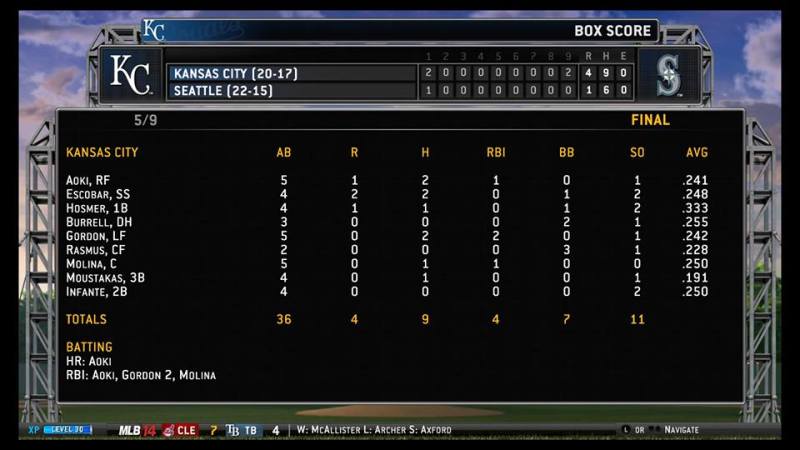 Next week, interleague play begins and the team starts to look around for help in some of the areas where they are struggling.  The future of baseball is at risk, and there’s no time to be carrying guys who have been terrible.  James Shields is 1-7 with an era well above 6.00.  Mike Moustakas has been mostly useless.  Sal Perez is still struggling to hit .200 and Jose Molina isn’t the answer.  Or is he???