Winning is hard, but apparently losing is even harder.  Pat Burrell and the Royals had set out to accomplish something far more difficult than sealing the deal on a solid division: blowing it in dramatic fashion.  In the past, the Kansas City Royals had made losing games look simple, but in 2014 they were a team of destiny.  Not only did they have the general momentum of the 2014-prime timeline on their side, but the improvements made by Pat Burrell and Strike-O-Matic gave them an extra push that was hard to undo.  Trading the closer and wrecking the up-the-middle defense by giving starting jobs to Brad Miller, Miguel Sano, and Jesus Montero should have been enough…  But was it?

The problem with relying on a poor defense to sink the Royals should have been clear: the team’s three best pitchers were strikeout specialists. Strike-O-Matic, Carlos Martinez, and Kyle Zimmer all had K/9 rates over 8.00, which limited the amount of damage the terrible up-the-middle combination could do to them.  Even Jesus Montero was capable of catching a fastball, and Sano/Miller simply didn’t get enough chances to let fieldable balls get away.  On the offensive side, they were even barely a step down from the players they were replacing.  Miller played about as well as Escobar had, and while Sal Perez was a much better hitter than Jesus Montero, his 2014 numbers simply hadn’t borne that out.  And as for Miguel Sano, who should have been completely overmatched in MLB?  Well… 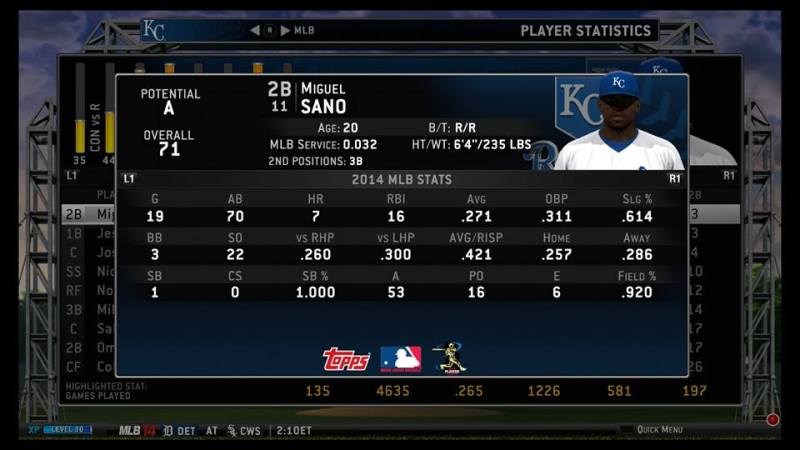 Indeed, Sano had been something of a sensation, at least at the plate.  Seven homeruns in seventy ABs was a hell of a performance, especially for a guy who should have been in AA.  He was a clear improvement over the former starting 2b, Omar Infante, who had become a rather useful bench player.  The other additions looked something like this: 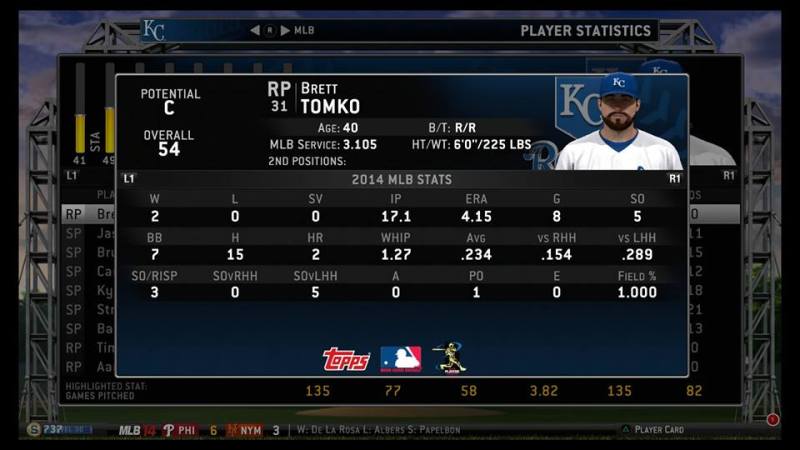 Pat Burrell tried everything to keep his team from winning.  Everything, of course, except performing poorly himself.  He still had his career stat line to think about, as well as a potential starting position on next year’s squad in jeopardy if he let himself falter.  Instead, he tried tricks like cutting the air conditioning in the clubhouse, keeping the team up all night telling them raucous stories about the mid 00’s Phillies featuring Jimmy Rollins’ legendary dirty jokes, and replacing Jesus Montero’s contact lenses with a new prescription every day.

All of that hard work only got him this far at the end of August:

A five game lead with twenty seven games left to play wasn’t exactly secure, but it wouldn’t be the easiest thing to blow.  This was made more difficult but the fact that the only team within realistic striking distance was the Cleveland Indians.  The Tigers and White Sox had been middling teams at best, and even the help of the Robot Master Stubby Candyman wasn’t enough to change the terrible fate of the Minnesota Twins.  The Indians would only face the Royals three times in September, not enough to close the gap…  Which means that the future of baseball hinged not only on the failure of the Royals, but the unlikely success of the Indians against other squads.

And that wasn’t the only problem facing the Royals in their quest to stay out of the playoffs.  The rest of the American League looked something like this:

Staying out of the wild card play-in game was the ideal goal, but that seemed almost impossible.  The Royals had to lose harder, lose faster, and lose in all sorts of novel new ways if they were going to stay out of the playoffs entirely.

There was only one thing working in Burrell’s favor: it was time to expand the Major League roster.  There were all sorts of folks on the 40 man roster who had no business in the Major Leagues. Brett Tomko was only the beginning of the filler that could be called up.

And maybe, just maybe, some folks could be played out of position…