One Way or the Highway: MMOs, Dota, and Metagames

I played my first MMO this year. I don’t know what came over me. This was shortly after finishing Lightning Returns and I wanted to play a good Final Fantasy game (as opposed to a good Valkyrie Profile game). Lots of people were saying that FF-XIV: A Realm Reborn wasn’t just a good MMO, but accessible to beginners.  The PS3 version was cheap on PSN and could be flipped into a PS4 account with little effort. So I went for it.

There are a few reasons I had never played an MMO before 2014.  As I’ve written before, I’m not much of a PC gamer. I don’t like mouse/keyboard as a control scheme for anything other than strategy games and I prefer to work on a laptop. Socializing is the last thing I want to do when playing games, so I didn’t have any interest in the chat room aspects of MMOs.  And I don’t like paying subscriptions.

A Realm Reborn was pretty fun for a while.  Since I almost always play fantasy RPGs as a wizard, I chose to be a Thaumaturge without any consideration of exactly how MMO classes work.  The Thaumaturge is the precursor to the Black Mage, so a lot of her time is spent casting Fira.  This turned out to be a very good decision, for reasons I’ll get to shortly.

For the most part, I enjoyed my time with A Realm Reborn. While MMO mission design deserves plenty of criticism–there’s a lot of “go here, kill these monsters, collect x number of monster tails”–it’s the sort of thing I’m down for every once in a while.  As long as there is a steady drip of new locations, new equipment, new monsters, and the occasional entertaining story among the side missions, I’m surprisingly happy to grind out fetch quests for a while. I played a lot of Kingdoms of Amalur: Reckoning after all. 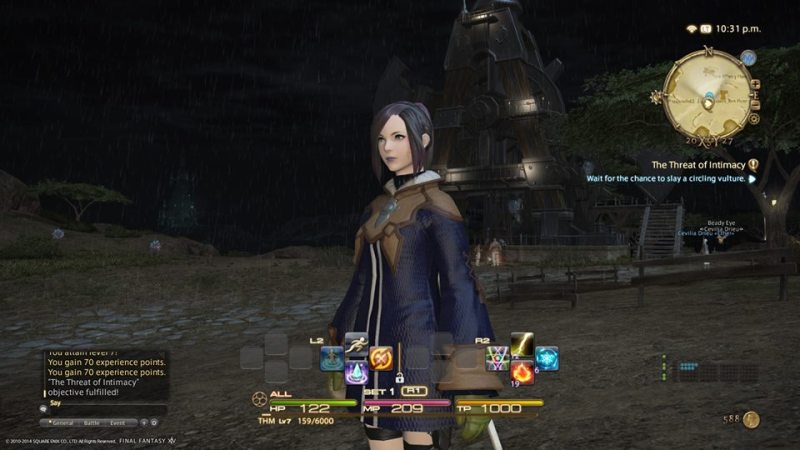 So why did I stop playing A Realm Reborn?  Dungeons.  This is going to sound crazy to people who play MMOs, but as soon as the game started forcing me into dungeons, I started losing interest.  Dungeons and their big brothers, raids, are the meat and potatoes of the modern MMO.  Outside of instances that pop up around the countryside, they are the main meaningful interaction you have with other players.  Without dungeons and raids, A Realm Reborn is basically the aforementioned Reckoning with some other people running around in the background.

Dungeons require a party of four (or more, in later “full party” dungeons) to work together to solve a series of light puzzles or defeat a series of mini-bosses.  This is a great idea in theory, but in practice it leads to a problem that I simply couldn’t resolve: there is only one right way to play an MMO.

Every class of character is, essentially, required to perform very specific duties in a dungeon for the party to be successful.  If anyone deviates from those duties, even a mini-boss encounter can become overwhelming.  To make matters worse, by the time I started every class and every dungeon had basically been “solved” in A Realm Reborn so there is even a well-known optimal way to perform those duties for each class.  A few skills should always be used, most skills should never be used, etc. etc.

In Dota and League of Legends, which admittedly are not MMOs but which I will touch on later, this concept is known as the meta-game.   The top strategies are developed through crowd-sourcing, and once they are discovered they become the only way to play for anyone other than high-skill players whose experiments inform the meta-game.

Every game has optimal strategies.  The only difference is that in most games, there aren’t three other people yelling at you if you deviate from those optimal strategies.  Turns out, I got really lucky in that I selected to play as a “ranged DPS” class character–a character whose primary function is to deal damage to enemies and basically stay out of the way of everyone else.  This is the easiest kind of character to play in A Realm Reborn because for 95% of the time I could just cycle Fire and Blizzard spells and everyone was happy with my performance.

But those other 5%–those times when there was something different we needed to do to beat a boss, or where I should have used the party’s limit break in a split second–were terrible.  I’ve played hundreds of hours of Call of Duty multiplayer and never experienced the kind of vitriol thrown at me in these brief moments where I slipped outside of the optimal play style.  As I keep saying, thank god I was a ranged DPS.  If I’d chosen to be a Gladiator, the rest of the team would have been relying on me to be the tank–absorbing aggro and damage for the entire team.  Boy, that would have been terrible.

I’m willing to admit all of this is my fault. I can’t really blame anyone for being mad at me.  First off, I shouldn’t have played with random people and should have sought out other newbies.  Second, It usually takes close to half an hour to form a party and another half an hour to run a dungeon.  My fuck-ups never really endangered a run, but each time would set us back and that was probably frustrating to others in the party who were trying to speed-run the encounters.  Third, I’m an MMO newbie so I probably should have done some research into my role.  Fourth, I didn’t have a keyboard so I couldn’t really check if there was anything I needed to know beforehand from the experienced players.

So I’m an idiot, but that’s kind of beside the point. If I did know exactly what was needed in these dungeons, I wouldn’t have had any interest in playing them.  Why? Because I don’t like playing games optimally.

When I was on my own in A Realm Reborn, I hardly ever even stuck to the ideal mixture of Fire/Blizzard/Sleep spells that optimized my Thaumaturge’s damage dealing ability.  It just wasn’t as fun as throwing in other random skills.  And that’s almost always how I play games.  I don’t try to do things perfectly, because trying dumb things and watching them fail is sometimes way more fun than being a well-oiled machine.

So I’m never even going to try Dota or League of Legends.  It’s a shame, because the idea of MOBAs seems fun.  Lots of characters with a mix of hyper-speed RPG leveling and realtime strategy?  Sounds great!  But if I have to read a wiki to understand what I’m supposed to do, then possibly ruin the entire game because I don’t want to do it?  Hell no.

Granted, I know that MOBA newbies aren’t expected to be perfect.  But I am sure they’re expected to play their lane, upgrade the right way, and press forward with the appropriate amount of aggression and/or caution.

I’d love to try a MOBA without a metagame, but I don’t even know how that’s even possible.  Balancing to allow for all options to be playable?  That’s difficult even in a single player game, where you might only have one person trying to break the system to their advantage.  But people on all sides, playing against each other at a high level, chipping away at the system?  A metagame will emerge, optimal strategies will be discovered, and people who want to play outside of those strategies will be yelled at like they are monsters.

So like MMOs for so many years, MOBAs will remain a giant blind spot in my experience with games.  And I really doubt I’ll be going back to MMOs any time soon, unless I either find a group of people equally committed to incredibly casual play or an MMO that eschews that DPS/Tank/Healer bit so strict roles aren’t required.

One thought on “One Way or the Highway: MMOs, Dota, and Metagames”