I killed four bosses yesterday. The first was a giant, shambling pile of corpses. It had given me fits late Saturday night, obliterating me in one with a flash of red light that was only telegraphed if the game camera was pointed in the right direction. Its name was The One Reborn. I had to grind out a few levels of vitality to be able to withstand the red flash. Once I could do that, he went down in one try.

The second boss was a towering man with a scythe who lives on top of a castle. With a swing of his blade, he tosses bloody skulls my way like he’s a Mortal Kombat character. He wears a crown but I don’t think he’s a king, because his name is Martyr Logarius. I summoned help to beat him. Ringing a bell just outside of his domain brought another player into my game. We took turns drawing the ire of Logarius while the other tore into his back. 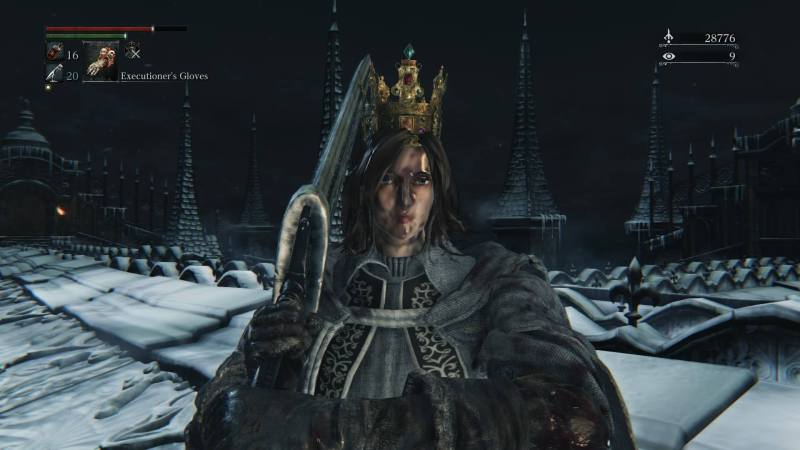 The third boss was the smallest one yet. Smaller even than my character. It looked like the classic alien gray, with an oversized head and withered body. As it shambled around its domain, it summoned identical-looking minions to attack and protect it. They swiped at me and then they shot lasers at me. This one was called the Celestial Emissary. It was probably the easiest boss I’ve faced so far and I still died a couple of times. My bad. I was doing so much damage to it that I got careless. I thought I could end the battle quickly. I did end the battle quickly, but not the way I wanted to.

The fourth boss was a man with his head in a cage. He yelled at me about how I could open his eyes. His arm turned into a swarm of tentacles when he was cornered and he summoned skeletal marionettes to fight on his behalf. I had to chase him through a series of cloudy hallways and drop down on him from above when he tried to put a gate between us. His name was Micolash, Host of the Nightmare. He caught me off guard a couple times with a new attack that staggered me and nearly left me for dead. But in the end I put my blade through him. Maybe that was what he wanted. I still don’t know.

I’ve done some cautious research and I’m almost done with Bloodborne. The death of Micolash opens up an area where I’ll be able to find a blood rock, an item that will let me upgrade my weapon to its maximum capacity. There are only a few bosses after that. I’ll have to decide whether to look up the requirements to fight the secret ones, or just see if I can figure it out on my own.

While I’ve been judicious in reading walkthroughs, I’m not sure I could spoil myself on anything. I don’t know what’s coming up. But I also can’t rightly say what I’ve already done. Bloodborne doesn’t make a lot of sense. It nestles its storytelling in item descriptions and optional interactions. A week ago, I accidentally swung my sword at a woman dressed like a crow. She became hostile and I had to kill her. She’d just given me a quest that I can never complete. If the details of the quest are important to the story, I’ll just have to stay in the dark.

This is a fascinating design decision. I’m truly enjoying Bloodborne, enough to spend most of my Sunday killing four boss enemies. And yet I’ll probably never figure out the story on my own. As far as I’m concerned, I’m just a hunter who stumbled into a haunted city who has decided to kill anything and everything that is remotely hostile. And a couple things that aren’t (sorry, crow lady).

That’s all the story I really need. My tale is one of challenge and accomplishment. I’m not killing these giant creatures for any reason other than to prove that I can. It’s Monster Hunter by way of Lovecraft, and that’s fine by me. But as I go along, I get hints of something deeper and darker. Something that could be put together into a real narrative. Maybe when I’m done, it will all come together in a flash of insight. But probably not.

In the old days, a lot of games were inscrutable. Almost all of them. I remember being stunned by Dragon Warrior IV, which managed to present something of a coherent story using dialog between the characters. That just didn’t happen back then. Either the story was so simple it could be delivered in a single paragraph–the princess has been kidnapped, you must save her–or it would have to be pieced together with badly-translated bits of text and a healthy imagination.

The story isn’t the only thing that is willfully obtuse about Bloodborne. I have spent an inordinate amount of time running around with only a half-formed idea of where I need to go next. The game is structured something like an open world, though it’s constructed through several networked “zones” that have slightly different architecture and enemies. There is no real linear progression here, especially if you’re like me and want to fight as many of the bosses as possible. The Celestial Emissary I mentioned above was actually located in an area fairly close to an early-game central hub that I hadn’t visited for several hours. I only knew to return to that area because I picked up a key that identified itself as “Upper Cathedral Key” and I remembered that there was a door above that hub that I never figured out how to open.

There was one particular NES game that absolutely stumped me back when I was a kid. The game began with a character select screen. You could choose to play as one of five different adventurers. They were all members of the same family–the mother, the father, the son, the daughter, and the pet fantasy dog–and the select screen was presented as a dinner table.

Each of the characters had different abilities and you needed to use specific characters in specific parts of the dungeon. But the game never really explained this. You could march any of the family members into any part of the massive dungeon and, most of the time, they’d end up dead. The dungeon itself was massive, with progression constrained by the use of certain family members and acquiring certain items.

The name of this game is Legacy of the Wizard. I had to look it up. My memory from over 20 years ago isn’t great. Fortunately, I’m not the only person who remembers this game and a google search for “NES Family RPG” was enough to produce the title. Turns out that Legacy of the Wizard is actually just the fourth game in a long-running Japanese series titled Dragon Slayer. None of the other Dragon Slayer games made it to North America because they were all developed for the PC88 or MSX. We did end up getting Faxanadu, an NES side story to one of the earlier games. And the PSP Legend of Heroes titles are remakes of other Dragon Slayer spinoffs, which is about as confusing as you can get.

Befitting the fact that it was the single localized entry in a long-running Japanese dungeon crawling series, nothing in Legacy of the Wizard made sense. Especially to a six year old. Nevertheless, the game fascinated me. I don’t think I ever acquired a single crown or killed a single boss. But time and time again, I’d run one of the family members into the dungeon. I’d take them as far as they could go. They’d die, I’d start over. Each time I’d press a little further, or attempt to explore somewhere new.

This is what Bloodborne, and the Souls games before it, try to invoke. Obviously, recapturing that feeling is impossible. Not just because I am thirty years old instead of six, but also because the internet makes it impossible. Nowadays, I can find a dozen walkthroughs of both Bloodborne and Legacy of the Wizard in an instant. Any time I’m stuck, any time I’m just beating my head up against the wall of an enemy or a mystery, the answer is at my fingertips.

Nevertheless, the feeling of entering a new area in Bloodborne almost recaptures that feeling of fear and awe. I always know I’m going to end up dead the first few times I step through the doorway into an unfamiliar zone. Even if I eventually give up and search the internet for a clue, those initial exploratory attempts call back to my days with games like Legacy of the Wizard: headlong sprints into a mysterious new world that will brutally kill me and leave me swearing at a television screen.

Suffice it to say, Bloodborne has won me over. And I can’t wait to barge in on the final boss, whatever silly name it might have, to see just how brutally it will shut me down.