If there was anything that Ayn Rand loved more than her friends’ husbands, it was the free market. This was not a view shared by the producers of Atlas Shrugged Part III.

Very few people asked for Atlas Shrugged to be adapted into a film, let alone three films. The first installment earned less than five million dollars at the box office, and only a few million more on DVD. It failed to recoup even half its budget and was critically panned across the board. Nevertheless, the producers pushed forward with their plan, even if they couldn’t bring back the director, most of the crew, and all of the cast. The second film was financed through a debt sale and filmed over a single month, the dying gasp of a dream that should have never been brought into reality. Part II debuted on three times as many screens as Part I, likely due to its release near the 2012 election and the hope that money could be made off of the politically charged subject matter. Nope. Part II bombed even harder than the first installment, barely squeaking out over three million dollars.

The promotional materials for Far Cry 3 have taught us that the definition of insanity is doing the same thing over and over again, expecting different results. So, naturally, the producers of the first two Atlas Shrugged films made a third one.

“How?” you ask, and I don’t have a good answer. No one with any sense would invest in a project like this–the third film of a trilogy that twice failed to earn a profit and consists, notoriously, of the worst parts of the book it is based on. Atlas Shrugged isn’t a masterpiece from the start, but it falls apart spectacularly in the last third, mostly because of a 70 page speech by one of the worst Mary Sue characters to ever be realized outside of fanfiction.net.

Part III reportedly cost 10 million dollars to produce, which is considerably cheaper than the first two films but still 10 million dollars more than anyone should have been willing to pay. To top that off, a kickstarter campaign was drawn into the mix. Allegedly, none of the money was used to actually produce the film, which begs an important question: where did it go? The page is really vague on that–“expanding the production and marketing” is the official wording. The producers elaborate on this in their video and FAQ, stating that the main purpose is to allow fans to be “part of Atlas Shrugged history.”

In other words, the kickstarter was a way to take money from people who were willing to give it. And can you really blame the producers when there were six people who paid $7,500 to have their name written on John Galt’s wall in the film? 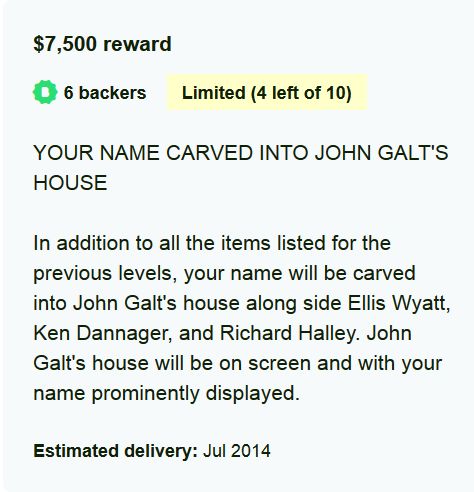 The idea of paying a bunch of money to get your name associated with the prime mover capitalist heroes of Atlas Shrugged is maybe the most amazing thing to come out of this whole series of terrible movies. It’s so dumb and it’s even vaguely even predatory, though I can’t feel sorry for the prey of this particular scam. And maybe, in the end, they’re onto something. Anyone who had their name put up on that wall has something in common with Ellis Wyatt: they basically set a bunch of money on fire.

In keeping with the fine tradition of continuity, the entire film has been recast once again. Gone is Samantha Mathis as Dagny Taggart, replaced by Laura Regan who you might recognize as (a) Harry’s wife on Mad Men or (b) the actress who portrays Robin Wright’s character in Unbreakable during flashbacks. That’s how little there is to say about her. Hank Rearden is no longer a mob boss, but played by Rob Morrow (in theory; we’ll get to that later). And the standout of Part II, Patrick Fabian, is sadly missing in action as James Taggart, but gleefully replaced by yet another in the revolving door of unsettling expressive actors, Greg Germann. Or, as you probably know him, Fish from Ally McBeal.

Everyone else has been recast as well, including Ray Wise as President Thompson. Which is a hell of a disappointment because President Thompson is actually in this film for more than a minute and Wise is sorely missed.