In the far-flung future, June 30 will be remembered as one of the turning points of the Base Wars.  On June 29, 2081, US President Emma Jeter ordered an overnight attack on a server farm in silicon valley.  This battle was known as the Net Offensive, Brought to You by State Farm.  (Corporate sponsorships of major military actions had become the norm in the 2040s, starting with the Mountain Dew-mascus Assault in 2042, and by 2081 no one was even moderately shocked by the idea.)

The Net Offensive Brought to You by State Farm began with the firebombing of Paolo Alto, which was made exceedingly difficult by the fact that the pilots could not use computers for targeting or navigation.  Dozens of jets took to the air over central California, dropping tons of explosives on everything that looked remotely like a server farm.  By the June 30, they actually started to hit meaningful targets.  President Jeter spent the morning deep in her secure bunker, watching a live feed of the attacks.  Every time the headquarters of an early 2000s  tech startup went up in flames, she would pound her chest and mutter “yeah jeets”.  Despite the fact that the Net Offensive Brought to You by State Farm was ultimately successful, this fact would be brought up multiple times during her impeachment hearings the next year.

But in the innocent days before the Base Wars, June 30 was not known for a violent battle.  At best it was known as Chan Ho Park’s birthday.  Or the midway point of the baseball season.

Why didn’t I come out of retirement for this season like Ray King and Kei Igawa?

Most people think of the All Star Break as the midpoint of the season but by the time the ASG rolls around, most teams have played 90+ games and have only 70 or so remaining.  For the purpose of marking a halfway point of the season and projecting forward, the end of June is a far better mark.  By now, the contending and rebuilding teams start to emerge, and folks begin working on deals to buy or sell near the trading deadline.  Season stats are based upon 100 or so innings for starting pitchers, 300 or so PAs for position players, and can be considered somewhat reliable. 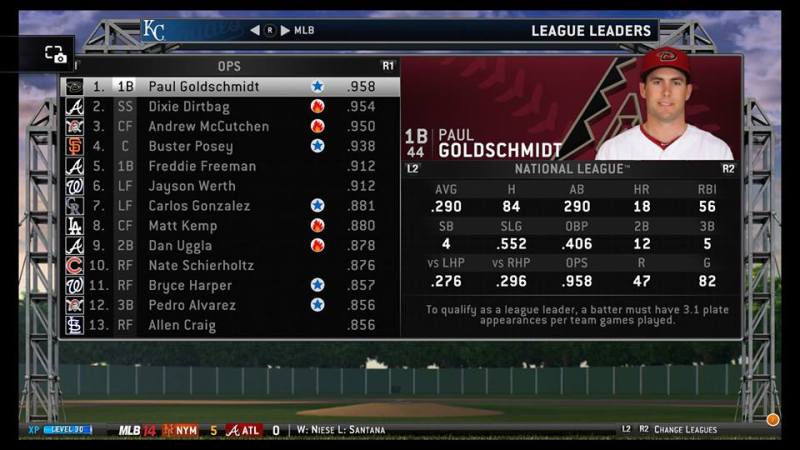 In the National League, the leaderboards were topped by some expected names.  Paul Goldschmidt was raking for the Diamondbacks and the only thing preventing total domination from the robot masters.  Dixie Dirtbag continued to destroy baseballs for the Atlanta Braves, giving them easily the best shortstop in the National League.  Unlike his release-worthy performance in 2014-prime, Dan Uggla returned to form for the Braves as well.  Meanwhile, near the bottom of the leaderboard, Allen Craig made the this writer very sad by reminding everyone what he could have been in 2014.

On the pitching leaderboards, no one was surprised at all by the top three of PrimeTime Moose, Jose Fernandez, and Clayton Kershaw.  But the presence of Tim Lincecum and Barry Zito raised some serious questions about exactly how much the robot masters changed the future of baseball.  Somehow, Lincecum had reverted to form and Zito had discovered form that he didn’t even have at the promising start of his career. 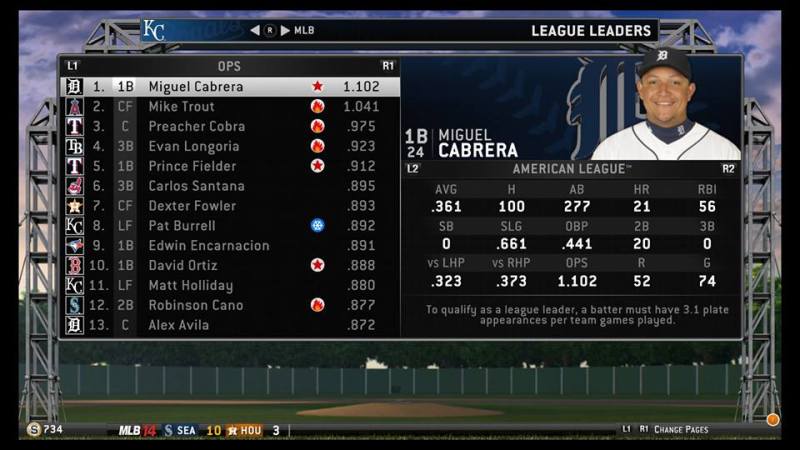 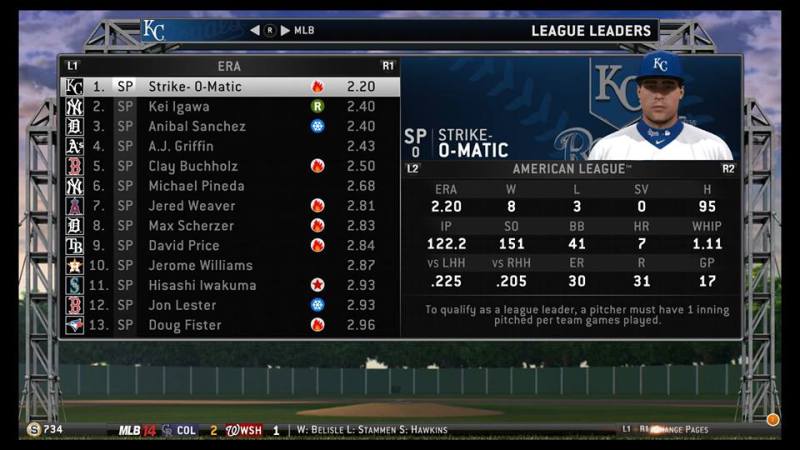 In the American League, the usual suspects Miguel Cabrera and Mike Trout held off an insurgent robot master, Preacher Cobra, in the AL OPS race.  Cobra had struggled for the first two months of the season, but turned into a monster during June, hitting almost .500 for the month.  For the KC Royals, Pat Burrell and Matt Holliday held down decent spots on the leaderboard.

On the other side of the baseball, the American League pitching leaderboard was half complete insanity, with Kei Igawa, Anibal Sanchez, and AJ Griffin vying for the second spot among ERA leaders behind Strike-O-Matic, and Jerome Williams’ name appearing on it at all.  Disheartening to the Royals was the absence of robot master Stubby Candyman from the list, as he had absolutely dominated them in two games, and it seemed as if the rest of the league wasn’t having the same difficulty with his vast array of breaking balls.

In the National League East, the multiple hitters the Braves had on the NL Leaderboards weren’t doing enough to hold off the Washington Nationals.  It was still a close race, but so far the Braves didn’t have the pitching to compete.  Mike Minor was their best starter in the first half, which is never a good situation to be in.  The excellent hitting of Dixie Dirtbag, Freddie Freeman, and the unexpected Dan Uggla weren’t enough to make up for the deficiencies on the mound.  Meanwhile, even the portly Ray King, fresh out of retirement, managed to hold down opposing teams well enough to give Bryce Harper, Jayson Werth, and friends a shot at a win in almost every game.

The only thing surprising about the NL Central was how poorly ever non-Cardinals team was doing.  In 2014-prime, the Brewers had been in competition for a playoff spot through most of the season.  In fact, they had led the division for almost the entirety of 2014.  The Pirates had made the playoffs.  Despite literally no changes to their rosters, both teams collapsed in alt-2014.  With 17.5 game between the Cardinals and their closest competition (the fucking Cubs), it looks like PrimeTime Moose, James Shields, Mike Matheny, and the St. Louis Cardinals would march into the playoffs without a problem.

The NL West continued to be a two team race between the same two teams that dominated the division in 2014-prime, the Dodgers and the Giants.  Still, none of the other teams in the West were actively bad.  Even the Diamondbacks, the welcome mat of 2014-prime, were working with a .500 record with the help of Robot Master Dubya Bush.

Caught in a virtual dead heat on June 30, the only thing that distinguished the Dodgers and the Giants was the fact that, due to scheduling irregularities, the Dodgers had played two more games.  Also, the Dodgers had Yasiel Puig. 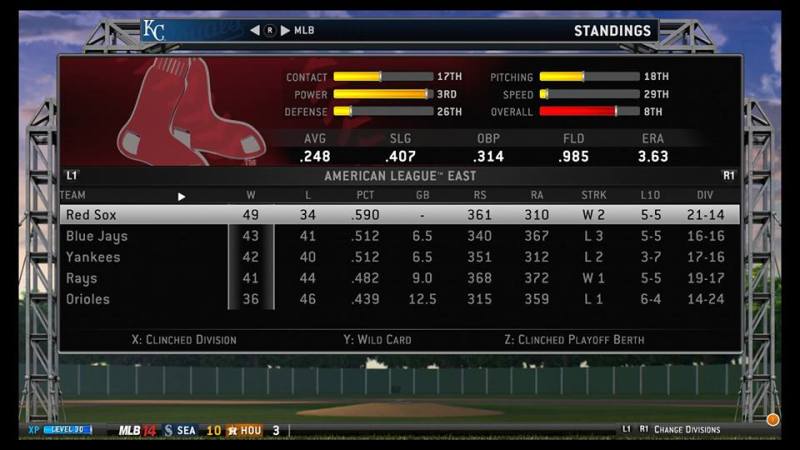 The AL East of alt-2014 was almost exactly the inverse of the 2014-prime division.  The Orioles, who had won the division, were stuck firmly in last place while the disappointing Red Sox managed to pull into a rather convincing division lead over the Blue Jays.  These Red Sox were not about to trade Jon Lester for Yoenis Cespedes.  Lester was too busy striking out Derek Jeter in his final season.

After taking control of the AL Central during the series against the Indians, the Royals refused to let up.  They went on a tear while the Indians faded towards .500.  By the end of the month, they were making it look like there was hardly any drama to mine on their run to the post-season.

Speaking of the Astros, they were not nearly as horrible as GM Jeff Luhnow tried to make them.  In alt-2014 they actually managed a winning record through the first 84 games, shocking the world.  This was not enough to give them a division lead or even a particularly strong case for the playoffs.  Still, second place and only 6.5 back was hardly what anyone expected from the Houston ballclub.

The division continued to be led by the Mariners, through a mixture of Hisashi Iwakuma, Robinson Cano, black magic, and bunting.

Next up, all star selections and the beginning of another round of possible trades…