Previous Episode: All Stars and aWARs

As July came to a close, everything was going according to plan for the alt-2014 Royals.  Following the all-star break, the team went on a dramatic winning streak, pulling well ahead of the AL Central.  The core of the offense–Hosmer, Burrell, Holliday, and Gordon–were finally firing on all cylinders.  Meanwhile, Strike-O-Matic, Carlos Martinez, Kyle Zimmer, and Bartolo Colon routinely provided quality starts and saved the shaky bullpen from overexposure.  It was starting to look like the Royals wouldn’t have any problem cruising to the playoffs.

It seemed as though Strike-O-Matic and Pat Burrell didn’t have much to worry about as the trade deadline approached.  But then one morning, shortly before a press conference to honor him for yet another MLB Rookie of the Week award, Strike-O-Matic injured himself by trying to iron his shirt while he was wearing it.  Of course, he was a machine, so this wasn’t really a problem.  He just needed to repair the damage to his artificial skin and reboot.  But in the process of restarting his internal computer, Strike-O-Matic regained all of the memories he had lost during the time travel process.

After all, Strike-O-Matic had been sent back from the post-apocalyptic future of 2099 to work with Mike Trout and the Angels to save baseball.  He had only recruited Pat Burrell and joined the Royals after a memory malfunction. No one assumed this was a problem, since it shouldn’t have mattered which team Strike-O-Matic helped to win, as long as it both changed history and stopped the robot masters.  But when Strike-O-Matic’s internal computer rebooted, he remembered a terrible truth.

END_OF_DOCUMENT_TOKEN_TO_BE_REPLACED

MLB The Show – World War K: All Stars and aWARs

There was once a time, before MLB.tv and interleague play, when the All-Star Game really meant something.  Most fans didn’t have a chance to see players in the other league unless their team made the World Series.  Seeing the most popular players in the other league, even for a single exhibition game, was a fun novelty in the middle of a much-needed break in the regular season.  But as teams in both league became more accessible to fans across the country, interest in the All Star Game waned and MLB went to great lengths to revitalize it.

First, MLB implemented “This Time It Counts”, awarding home field advantage to the winning league in the WS.  When that failed to bring in the ratings MLB desired, in 2024, the stakes were raised with “No, Really, This Time It Definitely Counts” in which the teams in the winning league were awarded an extra roster spot for the remainder of the season.  People thought that was rightfully stupid, so MLB petitioned the U.S. Congress to pass the “It Counts More Than Ever Act of 2037”, in which Federal highway funds were awarded to cities in the league winning the All-Star Game.  When even that wasn’t enough to get people interested in 2045, the United Nations issued its controversial UN Declaration of Making It Count, which denied human rights protections from fans of teams in the losing league.

Back in alt-2014, most of this was in the future.  The All Star Game was a glamorous spectacle about honoring fan favorites and stupidly determining home field advantage.  And the two starting pitchers for the American League and National League were no surprise.

Indeed, the ASG would be a rematch between the deranged mind of Mike Mussina inside of a robot body and the time traveling pitching machine chosen by Mike Trout to save baseball. But they weren’t the only machines chosen to represent their respective leagues in the exhibition game.  In fact, all three position player Robot Masters were in the lineup, with Dixie Dirtbag holding down shortstop in the NL, Preacher Cobra at C and Flash Money at RF in the AL. 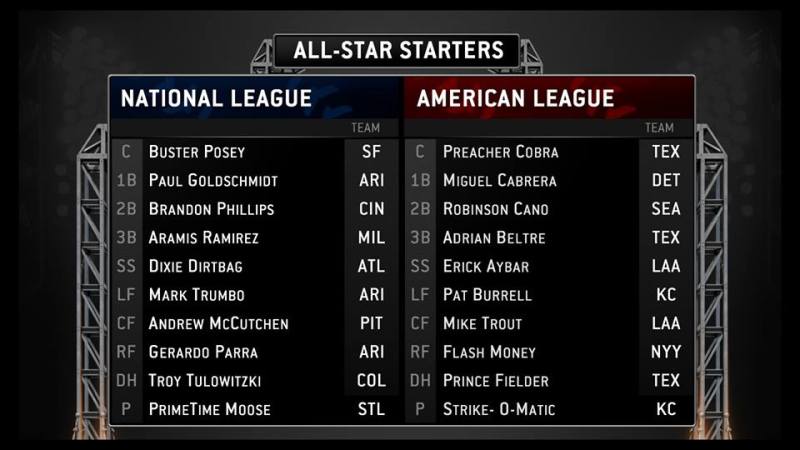 END_OF_DOCUMENT_TOKEN_TO_BE_REPLACED

In the far-flung future, June 30 will be remembered as one of the turning points of the Base Wars.  On June 29, 2081, US President Emma Jeter ordered an overnight attack on a server farm in silicon valley.  This battle was known as the Net Offensive, Brought to You by State Farm.  (Corporate sponsorships of major military actions had become the norm in the 2040s, starting with the Mountain Dew-mascus Assault in 2042, and by 2081 no one was even moderately shocked by the idea.)

The Net Offensive Brought to You by State Farm began with the firebombing of Paolo Alto, which was made exceedingly difficult by the fact that the pilots could not use computers for targeting or navigation.  Dozens of jets took to the air over central California, dropping tons of explosives on everything that looked remotely like a server farm.  By the June 30, they actually started to hit meaningful targets.  President Jeter spent the morning deep in her secure bunker, watching a live feed of the attacks.  Every time the headquarters of an early 2000s  tech startup went up in flames, she would pound her chest and mutter “yeah jeets”.  Despite the fact that the Net Offensive Brought to You by State Farm was ultimately successful, this fact would be brought up multiple times during her impeachment hearings the next year.

But in the innocent days before the Base Wars, June 30 was not known for a violent battle.  At best it was known as Chan Ho Park’s birthday.  Or the midway point of the baseball season.

Why didn’t I come out of retirement for this season like Ray King and Kei Igawa?

END_OF_DOCUMENT_TOKEN_TO_BE_REPLACED

After a disappointing 1-3 series against the New York Yankees, the Kansas City Royals were slated for a quick two game set against the Cleveland Indians.  After flagging over the last week themselves, the Indians had a two game lead in the AL Central, so the Royals could pull even with them and take first place for the first time since near the beginning of the season.  They were so close to first that they could almost taste it.

It was awful forward-thinking to believe that a two game series in the middle of June was critical to the pennant race, but Pat Burrell didn’t want to give up any ground to the Indians.  Something had to change.  Something had to motivate the Royals to move forward and rebound from their loss to the mediocre Yankees squad.

Burrell considered making another trade, but he realized that he could only rely upon transactional drama to carry the day so many times.  He was willing to go back to the trading market, but he’d wait until the July deadline.  After all, there are only so many parts of this story that can be about making trades, and certainly another one is to come.  Today, change would have to come from within.

There was one clear way that the team could be improved without a trade: something had to be done about the manager.  If only for a couple, critical games…

END_OF_DOCUMENT_TOKEN_TO_BE_REPLACED

PrimeTime Moose and the St. Louis Cardinals were defeated, and the Kansas City Royals wouldn’t have to face them again, except perhaps in the World Series.  Taking 3 out of 4 games from the Cardinals was a huge boost to the Royals, as the Redbirds had established themselves as the best team in the NL of the first half, despite the often puzzling decisions of the manager.  But this was just the beginning of a stressful month of June.  The MLB Amateur Draft was scheduled immediately after the series against the Cardinals, and then the New York Yankees rolled into Kansas City for a four game set.  The Yankees hadn’t been a particularly formidable team to date, but they were boosted by the addition of a robot master of their own.

Unlike Mike Mussina, who had allowed his consciousness to be used as a template for robot players because he wanted to be able to better control farm equipment, Rickey Henderson’s reasons for submitting to the experiment were a lot simpler: he still didn’t want to leave the game.  Despite being quite old when robots began playing MLB, Henderson was not ready to hang up his cleats.  The 80-something outfielder still believed he had a few more good seasons in him, even if his body disagreed in literally every way possible.

Rickey had not left baseball on his own terms.  While he played his final game in 2003, he continued to insist that he was in good enough shape to suit up for any number of teams, and could be an immediate contributor.  Despite a pedestrian final season and legs that were held together with withering sinew, he toughed it out in the independent leagues and maintained his desire to return to MLB until 2007.  The advent of robot players gave Rickey a chance to run again.

Whereas Mussina’s imprinting failed, Rickey’s was wildly successful.  The original Rickey Henderson remained in his body, while numerous copies of his consciousness were sold and uploaded into leadoff robots around MLB.  Each one was tweaked slightly, given upgrades and abilities to make it stand out.  The most successful was converted into a switch hitter for the Neo New York Yankees.  This particular iteration on Rickey Henderson, Flash Money, was chosen by K.I.R.K.G.I.B.S.O.N. to go back to 2014 to assist in the destruction of baseball.

END_OF_DOCUMENT_TOKEN_TO_BE_REPLACED

Pat Burrell and the Kansas City Royals thought that trading for Major League pieces in the middle of May would be a difficult proposition, but they had underestimated the power of the trading block.  After putting out feelers for a few players listed on the block, it became clear that they were more than just available–they were priced to move.  The Royals would be able to upgrade both their rotation and their lineup with some judicious planning.

The first call Pat Burrell made was to Sandy Alderson, GM of the struggling New York Mets.  The Mets had not been expected to contend in 2014, and in the new alternate future they were more than living up to expectations.  They sustained a 9-18 record in April and continued to barely limp along into May. Alderson already knew there wasn’t much hope of competing, and wanted to move some of the older spare parts off for pieces in the future.

END_OF_DOCUMENT_TOKEN_TO_BE_REPLACED

Previous Episode: The King in the North

As the baseball season slipped past the midpoint of May, the Kansas City Royals found themselves in a rut.  The handful of players keeping the team afloat found their numbers normalizing, and the struggling majority didn’t improve in kind.  A terrible 1-7 run against the Rockies, Orioles, and White Sox left them with a 24-23 record and stuck in third place.  The GM of most teams would just wait out the trouble and hope for a rebound.  But Pat Burrell and Strike-O-Matic knew that they couldn’t let the Royals fall any further behind.

END_OF_DOCUMENT_TOKEN_TO_BE_REPLACED

The Redbird Menace
Blog at WordPress.com.