PrimeTime Moose and the St. Louis Cardinals were defeated, and the Kansas City Royals wouldn’t have to face them again, except perhaps in the World Series.  Taking 3 out of 4 games from the Cardinals was a huge boost to the Royals, as the Redbirds had established themselves as the best team in the NL of the first half, despite the often puzzling decisions of the manager.  But this was just the beginning of a stressful month of June.  The MLB Amateur Draft was scheduled immediately after the series against the Cardinals, and then the New York Yankees rolled into Kansas City for a four game set.  The Yankees hadn’t been a particularly formidable team to date, but they were boosted by the addition of a robot master of their own.

Unlike Mike Mussina, who had allowed his consciousness to be used as a template for robot players because he wanted to be able to better control farm equipment, Rickey Henderson’s reasons for submitting to the experiment were a lot simpler: he still didn’t want to leave the game.  Despite being quite old when robots began playing MLB, Henderson was not ready to hang up his cleats.  The 80-something outfielder still believed he had a few more good seasons in him, even if his body disagreed in literally every way possible.

Rickey had not left baseball on his own terms.  While he played his final game in 2003, he continued to insist that he was in good enough shape to suit up for any number of teams, and could be an immediate contributor.  Despite a pedestrian final season and legs that were held together with withering sinew, he toughed it out in the independent leagues and maintained his desire to return to MLB until 2007.  The advent of robot players gave Rickey a chance to run again.

Whereas Mussina’s imprinting failed, Rickey’s was wildly successful.  The original Rickey Henderson remained in his body, while numerous copies of his consciousness were sold and uploaded into leadoff robots around MLB.  Each one was tweaked slightly, given upgrades and abilities to make it stand out.  The most successful was converted into a switch hitter for the Neo New York Yankees.  This particular iteration on Rickey Henderson, Flash Money, was chosen by K.I.R.K.G.I.B.S.O.N. to go back to 2014 to assist in the destruction of baseball.

But before the Royals could deal with Flash Money and the New York Yankees, they had to deal with the draft.  Even though player/GM Pat Burrell was entirely focused on winning in the 2014 season, he knew that he couldn’t just punt the draft.  No matter what happened in 2014, there was no going back to the future and Strike-O-Matic would have to be a Royal for at least a few more years.

Burrell felt pretty confident about his ability to evaluate Major League ballplayers–after all, he got Matt Holliday and Carlos Martinez for James Shields–but he had no idea how to scout amateurs.  As usual, he turned to his teammates for assistance.

And, as usual, the Kansas City Royals were not particularly helpful to Pat Burrell.  Rather than giving anything close to useful advice, they advanced their own personal agendas and occasionally ventured offensive comments regarding the state of the financial industry.  Burrell had to rely upon his own wiles, meaning that he drafted the player with the highest power rating first and then basically chose the most interesting names.

Other than the guy named Bae, Burrell focused primarily on possible replacements for departing position players–himself and Infante.  This would normally be a terrible strategy for the MLB draft, but in the brave new world created in alt-2014, projecting prospects was a lot more reliable and the particular players chosen were both already fairly close to the major leagues. 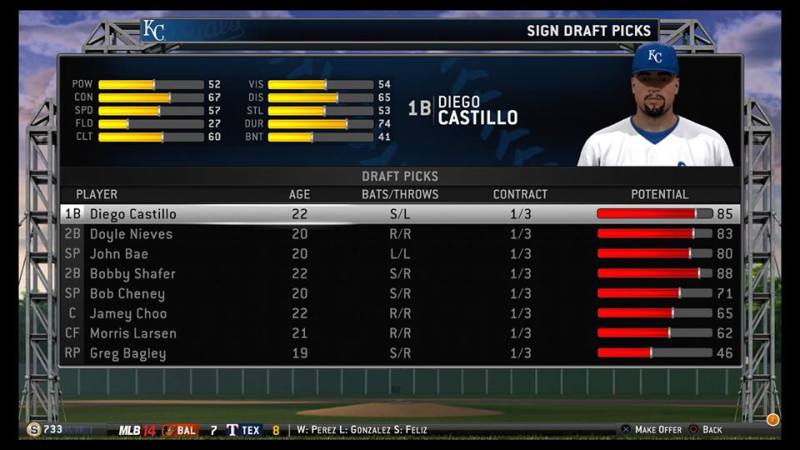 Diego Castillo was the most polished player available to the Royals, and his 52 power was the highest spotted by Kansas City scouting.  Of the two 2bs drafted in the supplemental and third rounds, respectively, Nieves was the most likely to actually stick in the middle infield, but Shafer had the better bat.  Bob Cheney, like John Bae, was drafted for his name.  The rest were somewhat randomly picked when Pat Burrell got bored.

With the draft complete, it was time to face the New York Yankees.  Riding high off beating the St. Louis Cardinals, including the walk-off win against PrimeTime Moose, the Royals were poised for a let down.  They figured that the Yankees, who were just a couple games over .500, would be less of an adversary.  They were wrong.  The Yankees, who had veterans CC Sabathia, Derek Jeter and Alex Rodriguez (who was not suspended in alt-2014) combined with pseudo-rookies Flash Money and Masahiro Tanaka, were a much better team than their record would indicate.

In the first game, the Royals were cut down by the most surprising member of the Yankees, lefty Kei Igawa.  Igawa had left MLB in 2011 after failing to make any progress in the league, but returned when he realized that the fate of the sport was going to be decided by the 2014 season.  The Yankees were far more desperate for pitching than they had been during his first stint, and he cracked the rotation out of spring training.  Without much of a scouting report, the Royals were stymied by Kei Igawa’s lefthanded junk-balling.

The Yankees’ offense was, unsurprisingly led by the performance of robot master Flash Money.  He led off the game versus Bruce Chen like this:

And from then on out, used his legs like you might expect from the league leader in stolen bases.  Money dominated the series, but not necessarily with his bat.  After his home run at the very beginning of the series, Money used another part of his Rickey Henderson-inspired skillset.  He worked walks from every starter he faced on the Royals staff, and a couple members of the bullpen.

It seemed as though Flash Money’s .270 batting average was quite deceptive.  Like Rickey Henderson, he was an incredibly patient hitter who punished pitchers for nibbling on the edges of the strike zone.  Unlike many speedy ballplayers, Money didn’t rely entirely on infield hits he could run out.  Instead, he used his legs to supplement his eye.  Walking him was like allowing a double, because almost invariably he would take second base on the next handful of pitches.

Bruce Chen and Carlos Martinez got lit up by the Yankees, but Bartolo Colon grinded through another decent start to allow the lineup to put together a win.  The Royals had one chance to salvage the series with a 2-2 split, and that was a game in which Strike-O-Matic would face off against Masahiro Tanaka.

Tanaka was completely dominant.  He made short work of the Royals lineup, no matter how improved it was.  Through the first five innings, he didn’t allow a hit or a walk.  The announcers danced around the term “perfect game” but their discretion wasn’t enough to preserve the perfecto.  Alex Gordon came to the plate in the seventh inning and did this:

So at least they stopped the perfect game.  For the most part, Strike-O-Matic matched Tanaka, and even held down Flash Money for his first two at-bats.  None of the other Royals pitchers had managed to stymie the robot leadoff hitter, but Strike-O made  quick work of him to start.

Then, in his third at-bat, Flash Money worked a walk off of the occasionally-wild Strike-O-Matic.  As usual, he did not stop at first base.

That was just what the Yankees needed to get started.  Strike-O retired Teixera in the next at bat, but he was followed by Jacoby Ellsbury, who doubled home Flash Money to give the Yankees a lead that, despite Gordon breaking up the perfect game,  would hold up for the rest of the game.

In dropping the final game of the series, the Royals lost all the progress towards the division lead they made against the Cardinals.  They dropped back one game behind the Indians, and it almost seemed like they were at square one.  But this time they would not be able to patch their holes with trades.  They would have to find strength from within.