Alright I’m on the way to my next game.

Not so fast, we need to download a patch.

Alright, Al, are we ready to go now?

Among other things we addressed a discrepancy between dynamic goals and social media messages.

I don’t know what that means.

Maybe you should check out your stats before you head to the game. 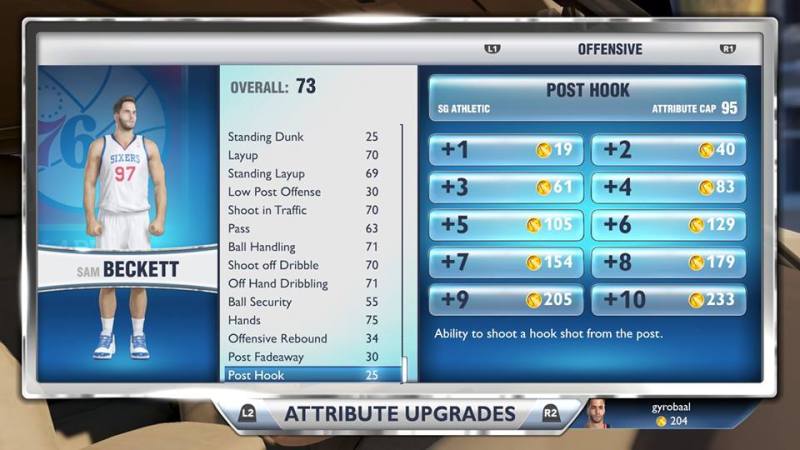 Looks like you upgraded your shooting ability when I wasn’t looking.

And didn’t upgrade anything else.

It was really annoying when I missed those shots in the showcase.

Well, in the future, try to spend your VC in a more balanced fashion.

I don’t want to be here long enogugh to worry about that!

…but I’m a hologram. We don’t always get what we want.

I tried it. It’s really not that good.

The crust is just their biscuit dough.

That’s your own problem. 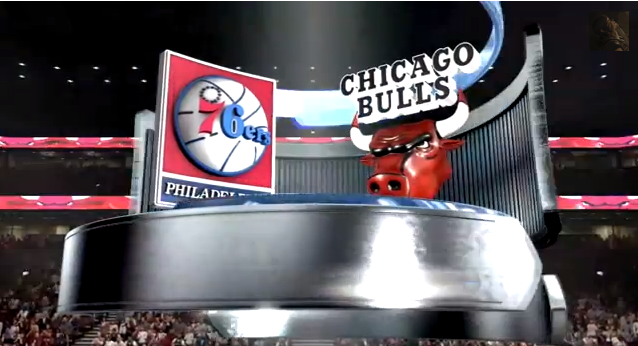 Oh no, it’s the Bulls. That means Michael Jordan.

What are you talking about, dawg? Jordan’s been retired for years.

Jordan’s retirement is just a smokescreen for the truth.

You ever heard of the Templars, Nerlens?

In later years they formed an alliance with the Freemasons.

I saw that Simpsons episode!

Everyone knows Michael Jordan was a Freemason, but he was also a Templar.

Who holds back the electric car? Who makes Steve Guttenberg a star? We do, we do!

His various retirements, and his ownership of the Wizards was all faked.

He continues to play for the Bulls, now under the name of Luol Deng.

Woah, this is more important than the Simpsons. Deng is actually Jordan?

I don’t know about this, Thaddeus. Doesn’t sound realistic.

Man, Thad, that’s crazy. We gotta do something.

We gotta prove he’s a fake. Get his birth certificate.

That’s right, Noel. That’s what I’ve been saying for years.

Coach! You know about Jordan, too?

Jordan? I thought we were talking about President–

I was just joking around a bit, coach. Nothing serious.

Good, because we’ve got a big game ahead of us.

We just barely beat a great team, then we were destroyed by a bad team.

So this game is when we prove ourselves.

My decision’s made, Beckett.

Unless there’s an injury, you’re staying on the bench.

Why did this have to happen to me?

Psst, Beckett… Nerlens… You know why this happened to him.

He got too close to Leng and saw that his face is just a mask.

Beckett! This is it! This is your moment! You’re in. 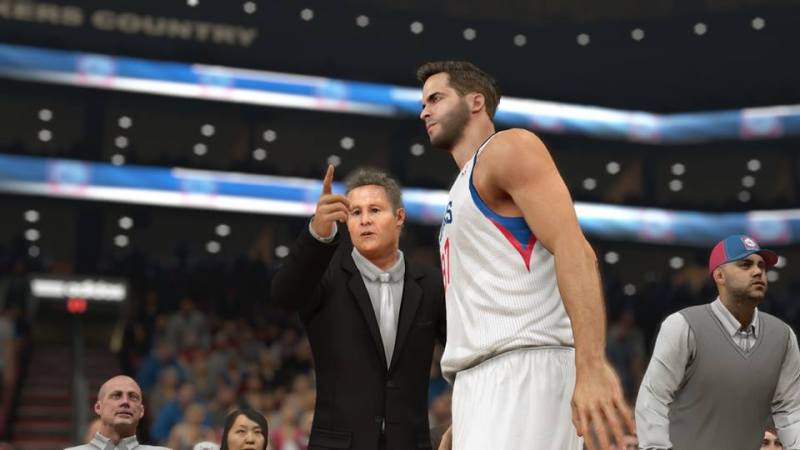 You did this, didn’t you?

All because I asked you to carry my bags.

No! I was just here on the bench! This was just an accident.

I’ll show you an accident later.

Someone else got in an accident? Oh my god! Who?

Then why did you say you had an accident to show Beckett?

It was a threat, Nerlens.

C’mon kd, show us what you’ve got.

How about that, Beckett? Your first points in the NBA.

I would hope so.

Yeah, good job, kid, but I still think you had me injured on purpose.

Just keep us in the lead. Don’t do anything fancy.

Take the safe shots, and get us home. 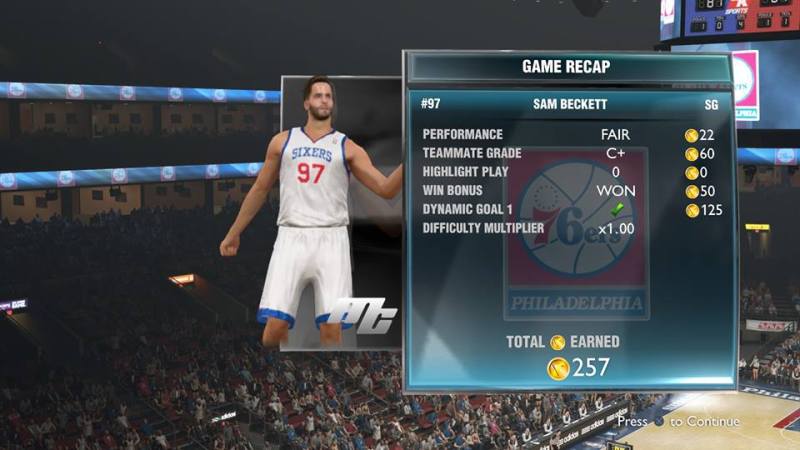 The goal I gave you when you came in.

I must have missed that.

Listen, kid, you did great. 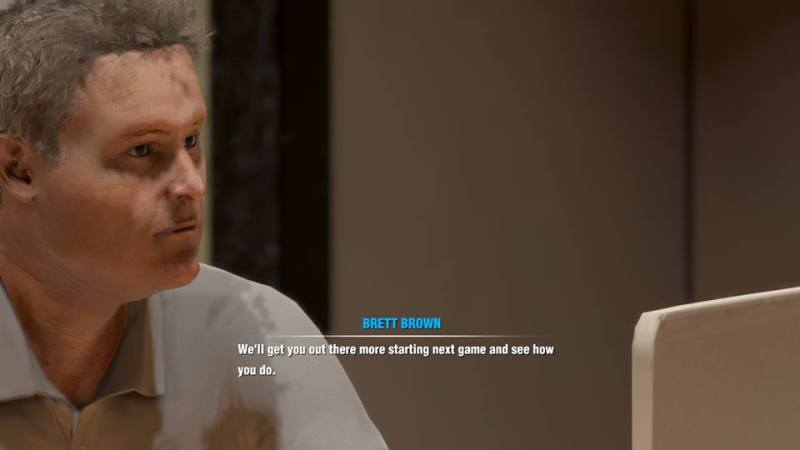 So I’m a starter now?

Let’s not get ahead of ourselves, but you’ll be getting a lot more time.

What are you just staring at me for?

I’m waiting for something.

Sam, this was your first game in the NBA. How did that make you feel?

I guess I didn’t know that press conferences were part of the package.

Is that the only suit you own?

Hey, while I’m here can anyone explain why every store in town only accepts VC?

I have to use this to upgrade my skills.

This isn’t the time, Beckett.

But VC is a consensus network that enables a new payment system and a completely digital money.

It is a decentralized peer-to-peer payment network that is powered by its users with no central authority.

In short, VC is the an implementation of a concept called “crypto-currency”.

It uses cryptography to control its creation and transactions, rather than a central authority.

Sorry coach, but that was literally nonsense.

Yeah, I am pretty sure you just put a bunch of words together without knowing what they mean.

But back on topic, how did you feel going out there after Richardson was hurt?

I just hoped he wasn’t seriously hurt, because I am pretty sure even now he’s planning on killing me.

Well you did a great job out there, Beckett.

Wait, I still have something to say about VC.

Someone cut his mic.

You wanna know if you ended my career, dawg?

I told you I didn’t have anything to do with that!

And why should I believe that? You got what you wanted.

That’s not what I wanted!

Okay, it is kind of what I wanted. But not like this!

At least you admit it.

Just look at twitter. Everyone is practically calling for my replacement now. 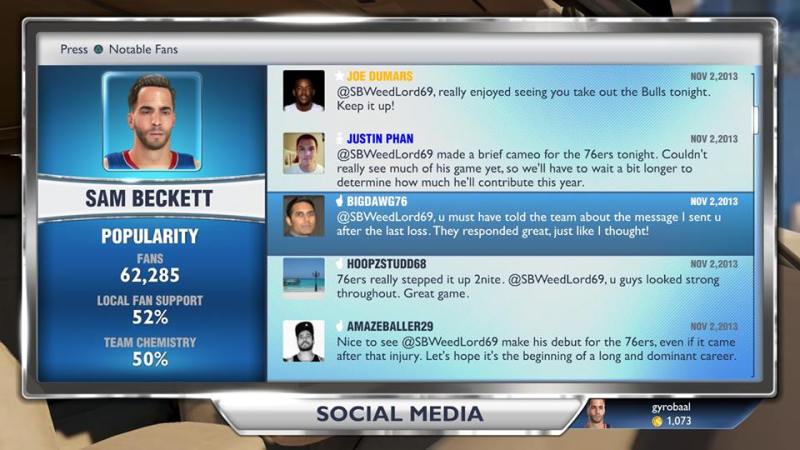 Hey, listen, I’ll carry your bags since your ankle is–

I thought I could help.

I don’t need your help, dawg, I need your obedience!

You know what’s going on, Nerlens. Becket tried to take me out.

You tried to take him out, Beckett? You’re…gay?

That’s fine and all I just didn’t expect that–

Not what I meant, Nerlens.

Yeah, I don’t even know how you’d come to that conclusion.

Shut up! Both of you kids!

I’m putting you all on notice.

And what does that mean?

When I was a kid my mom said it means we have to move out of our apartment.

But I’m a homeowner now so how could you put me on notice?

All right, Coach said I was going to be a starter.

Clearly I’m going to look at the lineup and–

I have some bad news for you, Beckett.

I see that. Didn’t you say I was going to start?

About that… Richardson went over my head.

Over your head? You’re the head coach!

The head coach is just the petite bourgeoisie of the NBA.

While they control the labor-power of the players, they still must work…

…and because they must work they are subject to the whims of the haute bourgeoisie.

That doesn’t explain anything.

Fuck, man, Richardson went to the 76ers owners, who are paying his contract.

Really, coach? He’s still the starter because of his contract?

I’m not going to disobey Will Smith.

Do you know what he could do to me?

Wait, Will Smith owns the team?

As in “Parents Just Don’t Understand”.

That is a deep fuckin’ cut for Will Smith.

Not Men In Black, or Indepedence Day, or Fresh Prince of Bel Air?

What are those? Are those also rap albums which make rap more accessible to white folks?

Dude, Will Smith is an actor and a movie star.

He became famous and not DJ Jazzy Jeff?

This is just depressing. 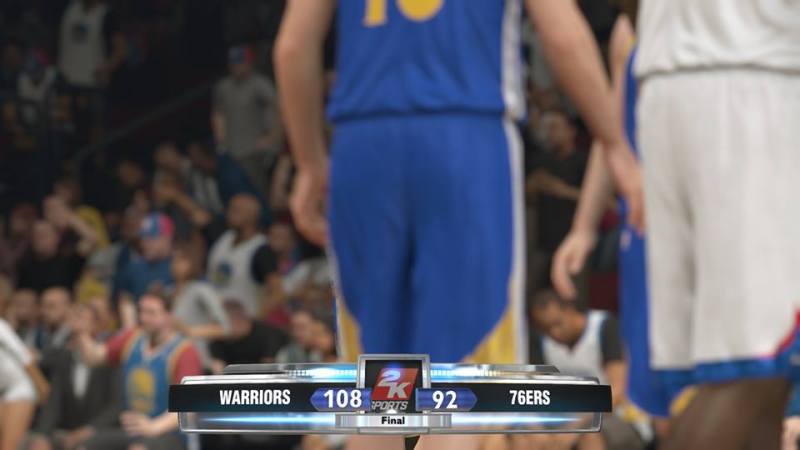 I knew I should have played more.

Fuck, Beckett, no offense but I put the blame on you.

Had us all messed up wondering how you don’t know who Will Smith is.

It was the first rap double album.

No, seriously, I’m not sure Will Smith should really be considered “rap”.

Hip hop, sure. And he was hella influential, no doubt.

That’s enough, Michael. The real problem wasn’t how Beckett has us confused, anyway.

It was how he played.

I’ll do better next time.

Yo, Beckett, don’t listen to them. You passed my first test with flying colors. 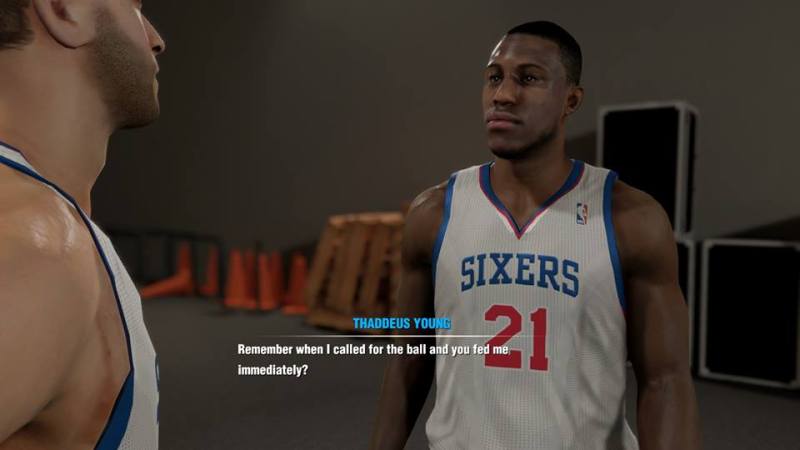 You set that up?

Well, as you know, I am the veteran leadership on this team.

Have you had a look around on this team?

You think Richardson’s a leader?

He is actively planning my downfall.

Yeah, and I’m just testing you.

Like I said, you passed so we’re all good.

Because I fed you the ball?

You know why we call it “feeding” the ball, Beckett?

In early basketball, the ball wasn’t very well made, and it would deflate as it was dribbled.

There was a vent on the side, and if you passed it the right way, it would re-inflate the ball.

So by passing the basketball, you “fed” the ball and made it full again.

You sure about that story, Thaddeus?

Absolutely. Would I fuck with you? And Why else would we call it “feeding”?

Fucking n00b feeder, if that’s what you’re gonna be doing stay out of my lane.

It’s one thing if you’re getting ganked but quit pulling that feeder shit, n00b.

I don’t think we’ve met, even though we’ve played four games together now.

I prefer to solo. Stay out of the way of feeders like you.

Just ignore him, Beckett. I barely know what he’s talking about half the time.

Thaddeus! For the last time, my name is not Tidehunter. It’s Thaddeus! 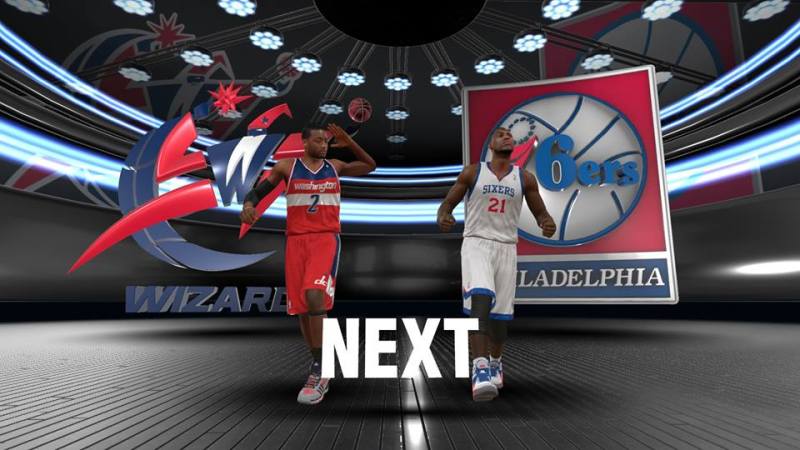 What? The Wizards again? After what they did to us, that’s not fair.

This is why we need a balanced schedule.

Now I’m pretty sure you just made that up.

Listen up, boys, we’ve got a challenge here for us.

Washington DC has come up here to beat us down.

Which is nothing new, but this time it’s the basketball team.

We gotta keep them oom because they got crazy nukes.

Something like that. We saw what they could do to us last time.

Coach, am I gonna get some minutes today?

What we did against the Wizards last time was unacceptable.

Think you can turn things around? 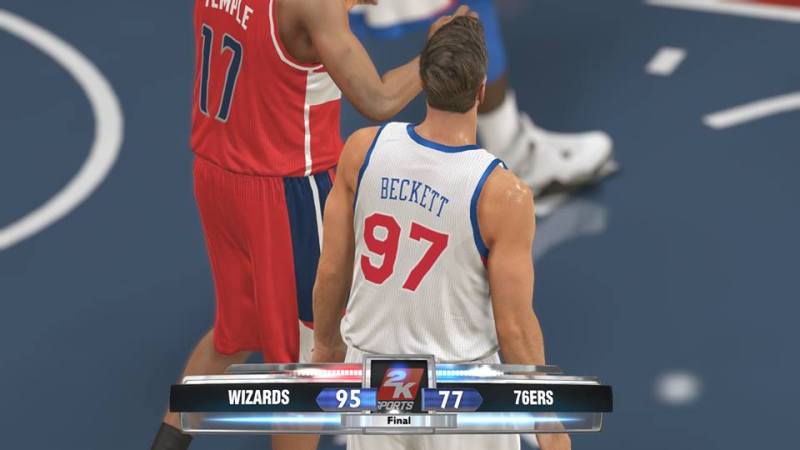 This was hardly your fault, Sam. Take a look at the stats.

Once again, you could work on all the non-scoring parts of your game.

I still haven’t figured out passing or rebounding or just abount anything else.

You’re not going to score this many points every game.

I know! It’s just… I think Richardson is trying to mess me up. 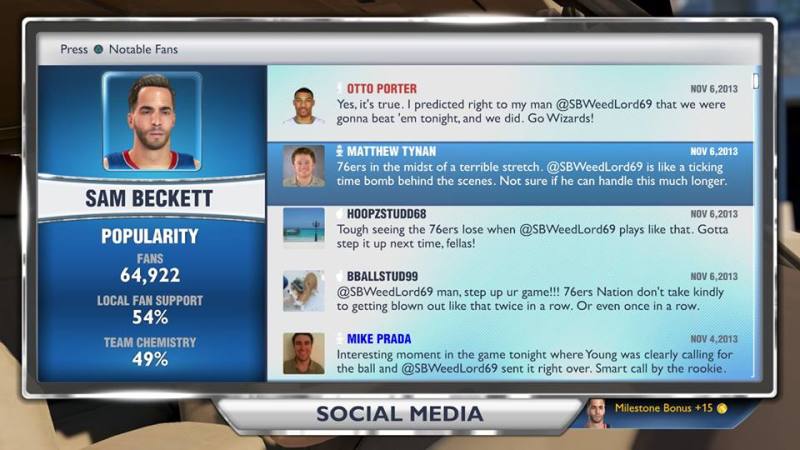 No excuses! This whole team is weird.

Like why is Evan Turner calling me Sand King?

At least I think it’s a compliment.

I passed to him because he was open.

See, you know how to pass the ball.

When people get wide open for once!

I can’t keep this up, Al. Playing for a losing team full of weirdos…

Tell me that Ziggy 2.0 has made some progress.

Everything points to March 29.

What could possibly be so important on that day?

It’s the last game between Philadelphia and Detroit.

It always comes back to him.

Well, it came came back to him that one time in the rookie showcase, I guess.

He’s not what he seems, Al. I think he knows about me.

He knows about leaping?

He called me Dr. Beckett.

Maybe it’s just a cute nickname. Maybe he likes you.

I really don’t think that’s it.

…but you have to have them ready for that game at least.

Jackson, we have a problem.

The computer from the past is beginning to figure out our plan.

We will have to accelerate the timetable.

But I don’t play against Beckett until the beginning of next month.

Deal with him then. We cannot let him get any closer to the truth.