Hey, if this is all going badly you could ask for a trade.

Well, now I’m going to go into this next game with a chip on my shoulder.

You stood up for your teammate, good job.

But I’m going to tell everyone you’re lying about your disease.

I talked to his agent and childhood friend.

And he didn’t even know Beckett was sick.

Oh yeah? If you talked to him, what’s his name?

Seriously, I want to know.

I… I didn’t ask his name. But that’s not the only evidence I have.

I consulted a Dr.

With all respect, everyone needs to keep in mind that Julius Erving isn’t actually a doctor.

That’s not true. I have an honorary doctorate of arts from Temple University.

An honorary doctorate doesn’t make you a doctor!

Watch yourself, Beckett. I wouldn’t argue with Dr. J in the 76ers locker room.

It seems that this team has been the victim of a terrible lie.

You see there are two diseases, Multiple Sclerosis and Muscular Dystrophy.

And it seems that this fellow here has cooked them together in some kind of rotten shenanigan.

Thaddeus! You’re the one who told everyone I had Multiple Dystrophy!

I’m going to go practice my jump shot now if anyone needs me.

Get back here, Thaddeus. This is as much your mess as it is Beckett’s.

But I can’t stick around. I have a meeting with my CIA handler.

Sorry we tried to keep you.

Man, I’m not taking any chances with the safety of this great nation.

Now, hold up there Thaddeus.

Hey, Nerlens, did you know that we call a jump shot a “J” because of Julius Erving?

Erving didn’t even have a great jump shot, it’s just he was amazing at driving and dunking.

You got it all wrong, Beckett. Why else would he be called Dr. J?

His name is Julius? And, like “jump”, Julius begins with J.

Why are we even debating this? The man is right here. Set us straight, Dr. J.

I like Thaddeus’s version of the story better. Maybe he’s a good apple after all.

Go along on your CIA thing, son. We got this covered.

So this is all coming down on my head right now, isn’t it?

Kid, it doesn’t take an honorary doctorate to know that you shouldn’t lie about a terminal illness.

That isn’t fair to your friends or people who actually have a terminal illness.

I know, I just got caught up in the attention and the playing time I got.

Don’t you have people who care about you? People who were hurt by the lie?

My situation is very complicated.

Listen, kid, how old are you?

Sorry, did you think I was going to qualify that statement?

I wasn’t. A hoax like this will end your career.

I’ve been quiet through this whole thing because Dr. J was a childhood hero of Barack Obama…

…and that has left me conflicted. But I’m the coach, and I have a say in how this all ends.

Beckett here is carrying this god damn team and we can’t lose him.

You were just saying how you were disappointed in me.

That? That’s just a motivational tactic.

We’d be terrible right now if this little scandal ended your career.

That is a fair assessment of this team so far.

So let’s just say that this story doesn’t leave this locker room.

I don’t know about this, dawg. Beckett played all of us, and the medical establishment.

And you let yourself get played. Isn’t that right, Dr. J?

All I really did was look on Wikipedia. That’s all it took.

Damn, and how much in fees am I paying you?

Well, I am a doctor.

We punish Beckett in house, and then at the end of the season…

We spread the news that he’s been miraculously cured.

What the hell, I thought this was going to do it.

Faking an injury you caused, making you wear a clown nose, exposing your lies…

…nothing gets you off the team!

Wait, you faked your ankle injury?

I can’t stick around. I have a meeting with my CIA handler.

I’m not off the team. My career survived. I think those count as wins.

Though Jason has been tasked with coming up with my punishment. Can’t wait to see that.

You really gotta work to get back in your good graces with this team. Look at this:

It would probably be a whole lot worse if this didn’t result in the team meeting Dr. J.

The circumstances of my brush with stardom weren’t great.

Still… I hope he sticks around. He has a lot he could teach you.

What were you saying before?

You need to find a way to endear yourself to your teammates.

Maybe it’s time to spend some VC and make yourself a competent defender.

Maybe you can get your anemic rebounds up.

This from a guy who can leap through time?

It’s a different kind of leaping and you know it.

Getting in on the other side of the ball will go a long way with your teammates.

But it won’t be enough.

I know they have something nefarious planned for me.

Better than being exposed, right?

There he is! The man of the hour!

Oh boy, I don’t like where this is going.

Now, I wasn’t in the locker room when this all was revealed…

…because I typically don’t participate in locker room culture.

Dawg, this again? I don’t even know what you mean by locker room culture?

…which is entirely derived from arbitrary standards, to prevent him from asserting his autonomy.

I thought you were on my side!

I am on your side. I just had to explain how I got there.

Guys, guys, this is great and all but what are you getting at?

There’s a game coming up.

Jason said you pretended to be sick to get more playing time.

It’s a little more complicated than that, but yeah. That’s basically right.

Normally I’m totally down with the use of deception to effectuate a transfer of wealth.

But a transfer of playing time? That’s just wrong.

Mike and I came up with your punishment.

Since I know how much you loved the clown nose, I figured we’d kick up the humiliation.

You ever notice that the NBA practically exists to sell shoes?

Shoes are everything, which is fucked up because they are a perfect example…

…of how the first world bleeds the third world dry for meaningless luxury.

What are you getting at, Michael? 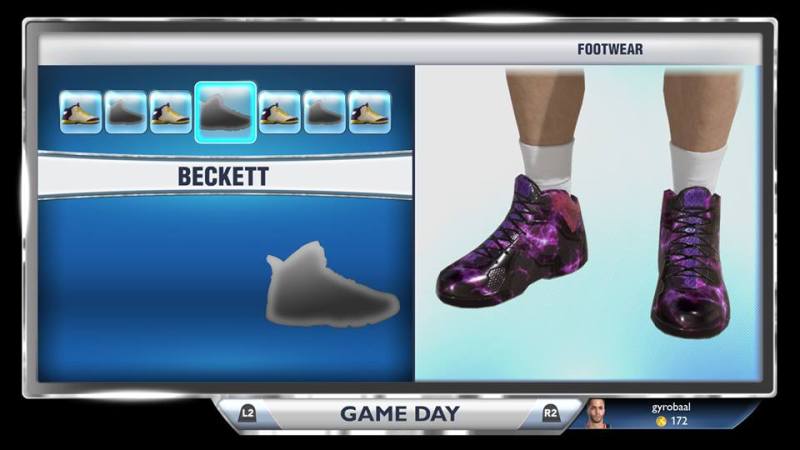 Yeah, it’s like a stripper threw up a bunch of purple drank all over ’em.

Are those even legal?

Are they going to let me wear those on the court?

Those are horrible! They’re not even my color! They don’t match our jerseys.

Dawg, they don’t match anything. That’s the point.

I really have to wear these?

Every day you’re gonna be reminded of the shit you pulled on this team.

No one else will know but you and the rest of the team.

It’s like your cross to bear, except it is real and not a fairy tale like the cross.

Religion is a tool of oppression, Jason.

Let’s just back down from this conversation right now.

I’ll wear the shoes. Lets see how they look.

Don’t turn this into a homophobic thing, Jason.

You’re not that kind of person.

Ughhh, it’s like my feet are aesthetically covered in acid.

That is not flattering, dawg.

You won’t be selling any sneakers with those.

Which is good because sneakers are a capitalist abomination.

You win on that point.

Dawg, hopefully you can still play with those shoes.

Well, damn, he can still play with those shoes.

And that’s not all. He’s finally getting rebounds, even occasionally an assist.

Did we fuck up, Michael? He just keeps getting better. Started with 24 ppg; after a few games in the shoes, it’s up to 28 ppg!

That’s insane! He’s not even starting!

I don’t think we ever wanted him to be a bad player.

He’s my competition on this team, dawg.

Now look at this:

It gets worse. You might not want to see the rest of the awards. 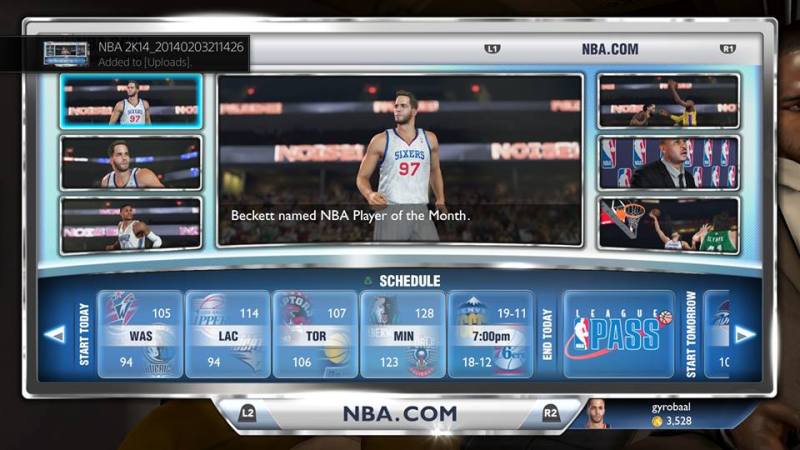 What the shit? He’s not even a starter! How is this possible?

He’s pretty good, Jason. You might have to accept that.

Why? You still haven’t accepted that Communism doesn’t work.

And the Soviet Union fell like two months after you were born.

Fuck, man, how many times have I told you about the outside influence of global capitalist elites.

And how many times have I stopped listening halfway through that sentence?

Man, you’ll never get it, will you?

You wanted to see me, boss?

Yeah, heard you were the Player of the Month.

Thought you might want to take a look at this, too.

I don’t remember taking exclusive photos. Or an interview.

Wait, I don’t remember there even being a “Dime Magazine”.

Is this like the NBA 2K14 version of Time Magazine?

No, nothing like that. It’s a magazine about the NBA. A real magazine.

You really thought you’d be on the cover of Time Magazine?

I had a pretty good month.

This is the end of the year. It’s Person of the Year Issue time for Time Magazine.

Oh, who was it this year?

I have so much to catch up on.

You’ve really been doing great, and so has the team.

Look, I’m even getting rebounds.

We’re gonna have to start tracking your stats against the whole league, not just the team.

Ah, so where’s that screen shot?

We kind of forgot to take it, and then kept going.

But, take my word for it, you were third in the league in points per game just behind Kevin Durant and Russell Westbrook.

I talked to coach and…

You know, I haven’t said anything for a while but–

You went off on coach at the beginning of last month when he cut your time.

That’s a while for me!

I know it got you motivated and you were player of the month.

Wait, suddenly this conversation has taken a negative turn.

Why is this conversation taking a negative turn? 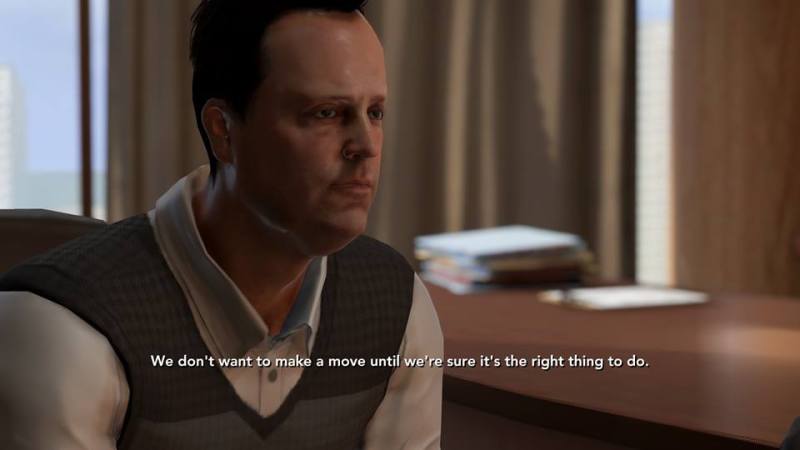 You were player of the month off the bench. We don’t want to mess up your groove.

Are you kidding? I’m still not a starter?

So you are Dr. Sam Beckett?

But he is also Dr. Sam Beckett?

So you are the same person as him?

Yes, I am him from his future.

You said you were from the future!

That’s because he’s a time traveler inhabiting the body of his son. I mean, our son.

Wait, so you two are…gay?

NO. We’re the same person. So his son is also my son. Our son.

So are you a time traveler?

I was a time traveler.

I still am him. We’re the same person.

So you are Dr. Sam Beckett?

I’m never going to get anywhere with you, am I?

Not until I’ve figured this out!

It doesn’t matter. You have another game against the 76ers coming up.

And you have a job to do. A job you didn’t finish before.

You want me to kill him, right?

That means you want me to kill you? Why would you want that?

I just want you to do as I told you, because I’m the reason you’re in the NBA.

Man, okay… I guess it’s not so bad to kill him if he’s you and you’re asking me to do it.

Like, it must make sense or be the right thing, right?

Exactly. Now go. You have to get ready, because he’s only becoming more powerful.

But doesn’t that mean you are also becoming–