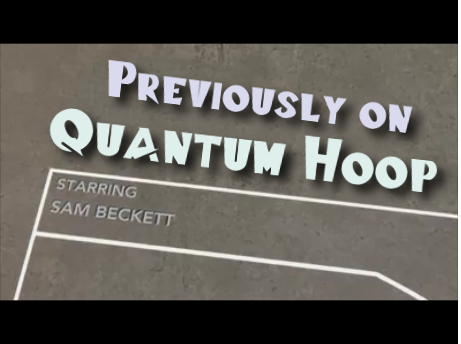 Yeah, and he said I was handsome.

What do you think that means?

I’m making you a starter.

I hate to interrupt this important moment, but Sam there’s something you should know.

Donna was murdered in the 1990s and the killer was never caught.

You know what that means?

We have to solve the murder.

But the victim was Donna! My wife in an alternate time line! And the mother of who I’m inhabiting.

You shouldn’t talk too much about that, it makes me uncomfortable.

I mean, oedipus much?

If there’s a murderer out there, even forgetting who the victim was, we have to capture them.

Doesn’t that make a lot more sense as a leaping goal than winning a basketball game on March 29?

Sam, I think you need to focus on basketball right now.

I can’t! Not with this out there.

Don’t worry, have you seen my player ratings? I think I can play ball and solve a murder at the same time.

Did I hear you say something about a murder?

No, of course not.

Because I have some interest in that particular field. 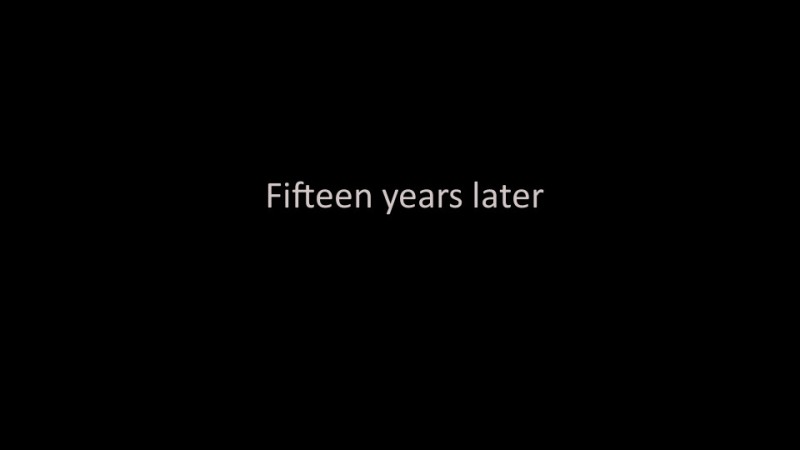 So, you want to talk about my mom?

We want to talk about the Donna Beckett case.

It’s been a long time. I’m a lot of things now.

Okay, well I don’t remember a lot about the “case”.

You see, I was possessed by the time traveling spirit of my father at the time.

Listen, kid, we all do stupid things when we’re young.

You don’t need to make up stories to excuse what we did.

Didn’t I teach you that lesson back then? When you were faking that disease?

But this isn’t a lie! My father was involved with this thing called Project Quantum Leap.

And in 2013 he took over my body to win a basketball game or something.

All right kid, slow down. I guess we’re gonna have to get the story from your partner.

Yeah, Michael Carter Williams is in the next room. 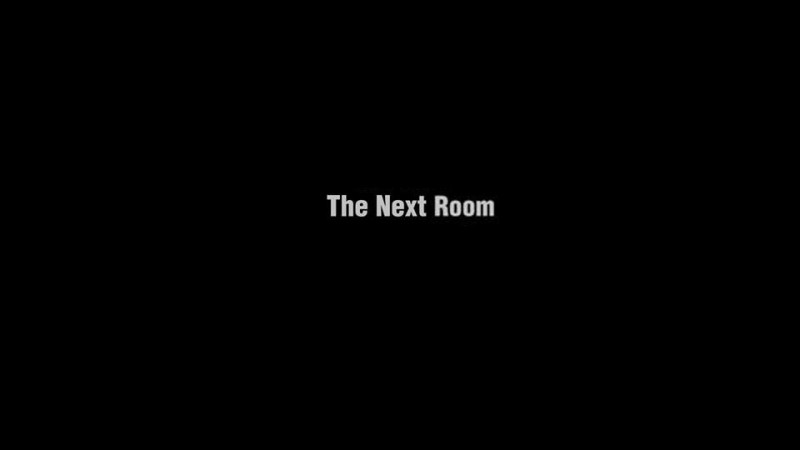 So you want to know about Donna Beckett?

I’ll tell you about Donna Beckett, but you’re not gonna like what you hear.

Better than what we’ve heard from Sam Junior.

You ever really think about a basketball?

When you’re on the court, the basketball is the most important thing in the world.

But what gives a basketball its shape? What makes it more than a piece of flat rubber?

Everything that’s so important to us is really just air.

Okay, maybe this isn’t better than what we’re getting from Sam Junior. 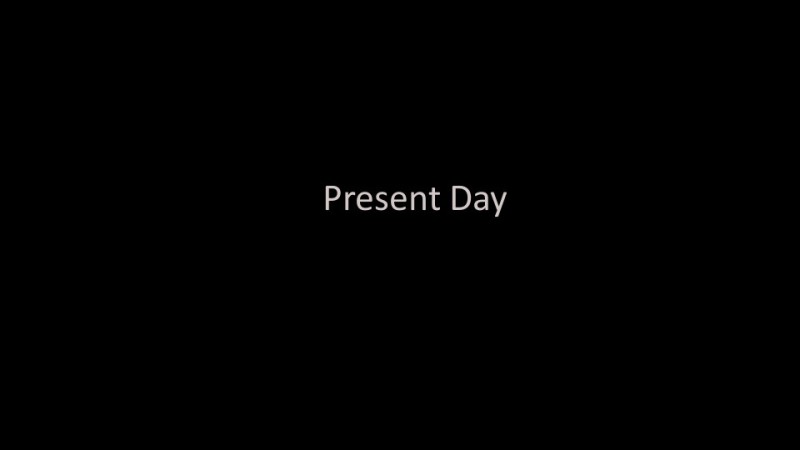 So you really want to help me solve my mother’s murder?

Of course I do. Why would I lie about something like that?

Thanks to Thaddeus Young, I’m pretty suspicious about being lied to.

I want to make sure you know what you’re getting yourself into.

You’re about to step into the shadows…

…and when you spend too much time in the darkness, the light will start to burn your eyes.

So, what do you know about investigating a murder?

Since you seem to have expertise in that matter.

Expertise is a strange thing.

Repetitive exposure to certain experiences builds up a tolerance.

And even when that tolerance is unnatural, it is celebrated.

Man, I don’t know what you’re talking about.

And I’m a genius level physicist.

Or, uh, the son of a genius level physicist.

Do you know what we have to do next?

Interview witnesses? Go over the physical evidence? Examine the scene.

No, we have a basketball game against the Bobcats.

I thought we were going to solve my mother’s murder.

We’ll get to that. 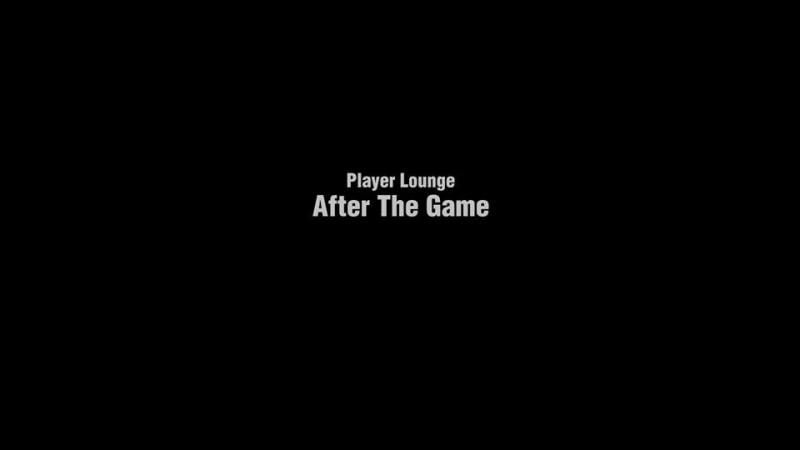 Yo, Beckett, I hear that you and Mike are poking around your mother’s murder.

How did everyone find out?

I just wanted to warn you. You don’t want to poke around on this case.

What? Why? What do you know?

Listen, back when I first got into the league I played alongside a center named Dean Garrett.

There’s a reason for that. He went to Indiana back in the 80s. Spent a lot of time giving back to his school.

Started investigating an unsolved murder a few years back. Woman by the name of Donna Beckett.

What happened to him?

Yeah, but how is that connected to anything?

I’m just trying to tell you the dangers of what you’re getting into.

I’m doing you a favor.

No, you’re just trying to discourage me. Like always.

This isn’t a joke, Beckett.

Quit fucking with us, Jason.

Where did you come from, Michael?

Nothingness. I came from nothingness just like everyone else in this world.

Wow, that’s not what I meant but–

Leave this to me, Beckett. I’ll find out what he’s hiding.

So, did you find out what he was hiding.

You can never truly find out everything a man is hiding.

But sometimes you can scare him enough that his eyes tell you the truth.

You didn’t answer my question.

That’s because you’re not asking the right questions!

You know, there are several types of basketball players.

You got the bully, who muscles his way to the rim.

The charmer, who fakes one way and goes the next.

The brain, who surveys the court and–

Are you going anywhere with this?

Are you eventually going to get to the point?

This is the point.

I told you, I don’t remember any of this.

Man, I don’t know which of you two is weirder.

I’ve heard about the case since, though, and I think we ended up getting the lead from coach.

Yeah, but that was before the Tea Party rebellion. He was just “coach” back then.

I knew you’d come to me about this eventually, Beckett.

I just hoped it would be after you were traded or retired.

You know something about my mother’s murder.

I know a lot of things that seem to elude professional investigators.

Listen to this man, he knows what he’s talking about.

At some point I’m going to need someone to explain this 9/11 thing to me.

I definitely missed something.

Yeah, you and the mainstream media.

I don’t get it, coach, how are you involved with a murder investigation from so many years ago.

Like I said, I don’t trust the system. Unsolved murders, the federal interest rate, chemtrails…

…but actually ticks a second every time a Jewish person is born?

What did I say? It’s all connected.

So you did your own investigation into my mother’s murder?

Me and some people I met on usenet.

Usenet! I know what that is!

We found a journal from one of the investigators detailing the leads he never followed up on.

Because of pressure from the government.

Why would the government cover up a murder?

Wait really? You’re surprised that the government would cover up a murder?

We laughed for at least a full minute.

It was the longest I ever laughed, because laughter is just the brain lying to itself…

…to convince itself that existence isn’t drab and meaningless.

So the government was involved?

The government is always involved.

You clearly think that means something. Care to explain.

Nah, nothing means anything.

I keep looking at this journal and getting nowhere.

The investigator talks about The Yellow King.

Notes left in the handwriting of the murderer talk about it.

Who do you think that is?

And I can’t stop thinking about how I fouled out of that last game.

I don’t know, Mike, thought that call was legit.

What do you think the average IQ of a referee is?

I look at ’em and see a propensity for obesity, stubborness, a desperate need to cling to arbitrary rules.

Rules laid down by other short-sighted men looking to make a few bucks.

If the only thing keeping a player decent are “rules” then that player is a piece of shit.

And what you should be worried about is what this Yellow King means.

Oh! I know what that means.

Yeah. Let me walk you through it.

Florida is a sunny state. The official nickname is even “the Sunshine State”.

Miami is a city in Florida. So you’re looking for the King in Miami.

Now, who in Miami has the nickname “King”?

And guess who we’re playing tomorrow? The Heat. 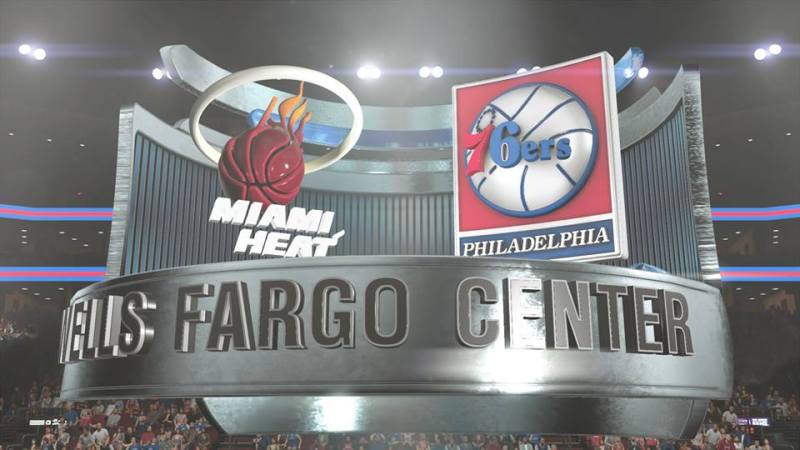 All right, Beckett, you know the plan.

I’m gonna go out there and talk to LeBron.

The best player in the NBA. Just going to talk like it’s no big deal.

I sent over a message to the Heat locker room that you needed to talk.

Great! This isn’t awkward at all. 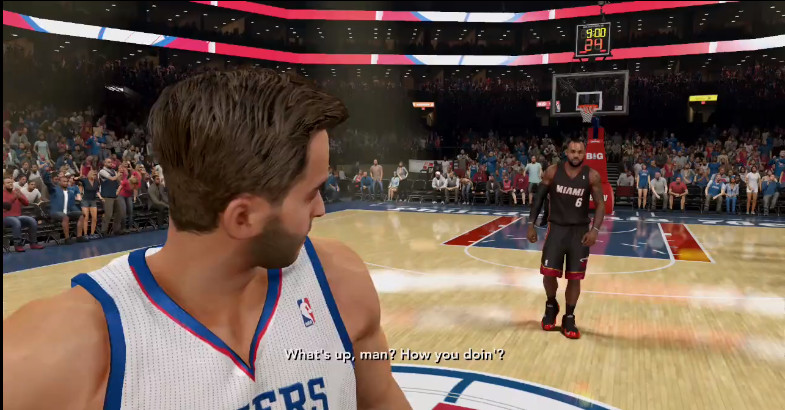 Heard you want to talk to me.

Some rookie who just got into the league trying to reach out to King James.

You’re leading the league in points per game. 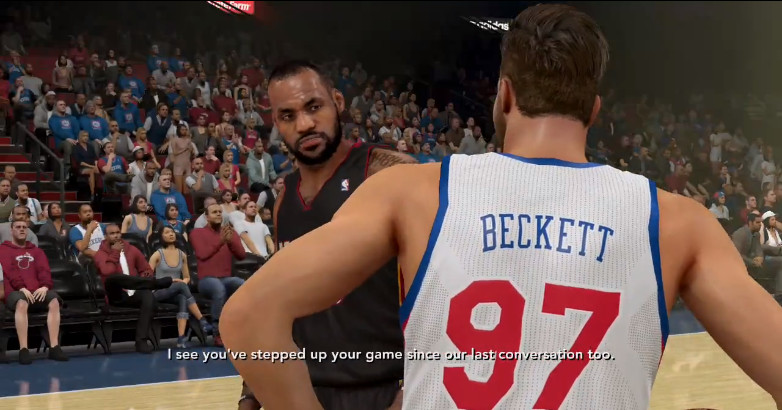 Thanks, this is totally normal, right?

And you know what else is totally normal?

I didn’t want to talk to you about the game.

What do you know about Donna Beckett?

Been a while since I heard that name.

So you do know about her murder?

I guess I can say that much. And that’s not all…

Who was it? Who was responsible?

And how could you have been involved?

That’s a little hard to explain.

First off, do you believe in time travel?

I’ll tell you more, but first I need to see if you can ball like me.

Gonna show you how I dunk… 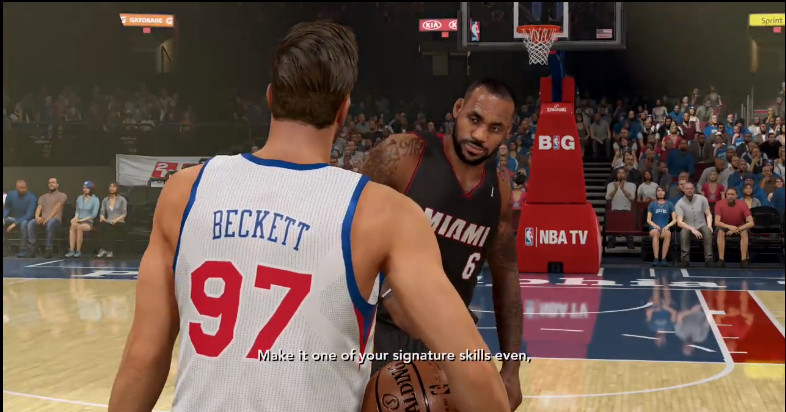 Wait, you’re not going to tell me about my mother’s killer unless I dunk like you?

Yeah, let me show you.

Keep up your energy as you go from one end of the court to the other.

I can do that.

Okay, here’s the story: turns out Donna Beckett’s murderer was some kind of time traveler.

What? Are you kidding?

He didn’t just kill your mother, he used his knowledge of the future.

Using cryptic clues, he gave out various information regarding the next two decades of the NBA.

This included my signing with the Miami Heat.

The FBI came to me when I was making “The Decision” and said I had to sign with the Heat.

Something about preserving the future. All because of what this guy said about “The Yellow King”.

Wow, coach was right. The government was behind this.

Behind the killing? No. But behind the coverup? Sure.

Damn, how am I going to solve this now?

I dunno, but I hope you can because I’m pretty disconcerted abotu a time traveling murderer. 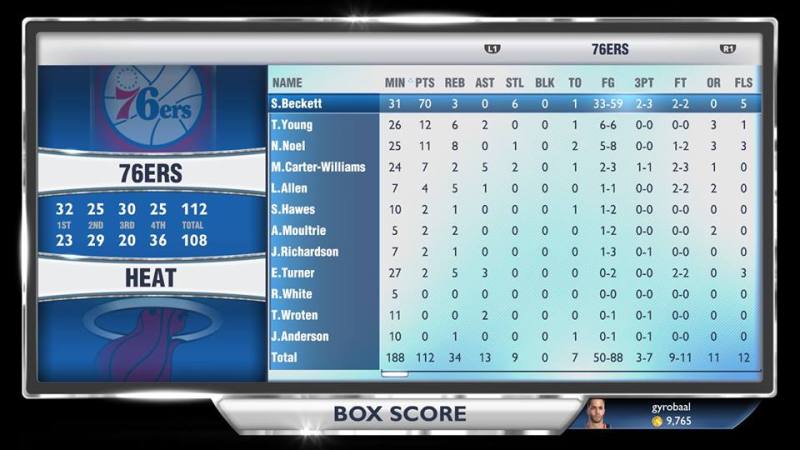 Man, I need to quit giving you advice. You killed us out there. Seventy Fucking Points.

I wanted to prove myself to you, in case I needed more help.

More help with what? The game? Or finding a murderer?

I don’t seem to need much help with the game. 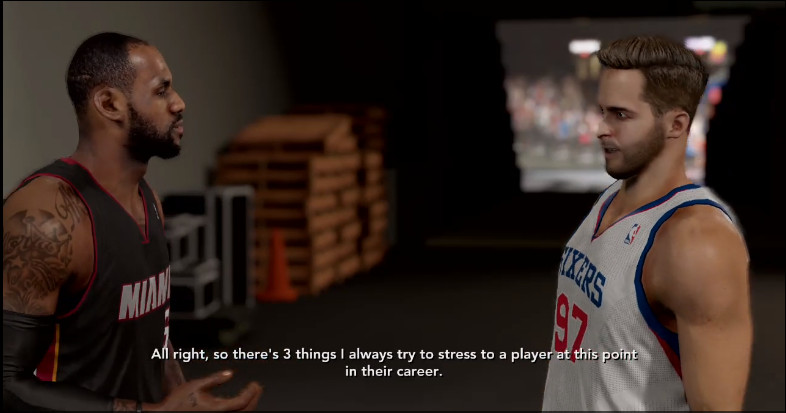 Okay, first, there are several types of basketball players.

You got the bully, who muscles his way to the rim…

So LeBron said that a time traveller killed your mother?

That’s what I heard.

Probably seemed crazy back then, back before the Time Wars.

But LeBron always was smarter than the rest.

We’ve been going through this all day and I don’t think we’ve gotten anywhere.

Each clue seems to just be more confusing than the last.

So who killed Donna Beckett?

And when LeBron said it was a time traveler, he told us exactly who did it as well.

There was only one person travelling through time back when my mother died. 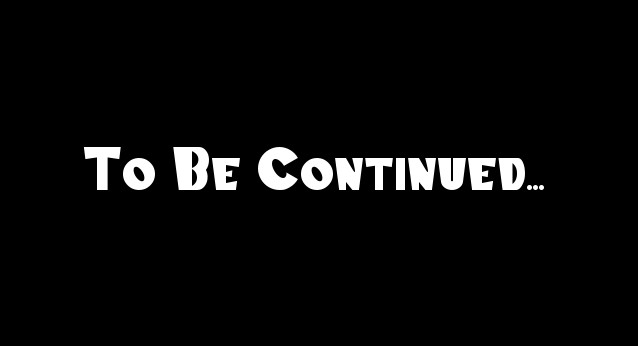