Yo Beckett I have these endorsements but you gotta make a choice.

You know, from the Miller Lite commercials.

Oh, I guess you’re too young for that.

Sprite or Sprint? Nike or Jordan?

Shut up and choose!

We’re getting close, Sam. One more win and the 76ers clinch a playoff spot.

I don’t care about that. March 29 is what matters, right?

Maybe. I’ve had Ziggy 2.0 looking into this, and it isn’t quite so simple.

In the original timeline, the 76ers narrowly avoided setting a record on March 29…

…the record for most consecutive losses for an NBA team.

They didn’t have anyone who could score like you. Thaddeus Young had the best PPG.

It was a disgraceful season. But by leaping into your son, and setting him right before the draft…

…you made sure that the 76ers had a frontline shooter and everything fell into place.

That was all it took?

Somehow it also prevented Nerlens Noel from getting injured…

…and netted the 76ers a phantom draft pick to select Michael Carter-Williams.

Fair enough. But you said that March 29 was important across all timelines.

This is going to take some explanation.

Right now… It isn’t your first time leaping into this timeline.

In the first, the 76ers are godawful and almost set a record number of losses.

In the second, you jump into the body of Sam Jr., lead the team to surprising success…

…and clinch the playoffs on March 29.

That doesn’t make any sense. We just need one more win to clinch…

That’s right. Because now we’re in the third version of the timeline.

In the second version, which I was just talking about, a certain player dind’t make the NBA.

Jackson Ellis was a nobody. He didn’t even get drafted.

So what are you saying?

Jackson Ellis pushed you to play harder, and now the 76ers are on the cusp of the playoffs.

No, that’s not what I meant.

Are you telling me there is some version of this timeline where Jackson Ellis doesn’t exist?

Why don’t I remember this second timeline?

The same reason everyone in the time periods you leap into…

…can’t remember what happened before you came along.

Are you saying that someone from the future is interfering in my leap?

Something like that. I’ve got Ziggy 2.0 working on a graph to explain everything.

Al, you know I’m not a visual learner.

I think it will help.

In the mean time, you should focus on getting the 76ers to the playoffs.

When you jumped into timeline 2, that was the trigger for your leap out.

I doubt it. Everything from Ziggy 2.0 indicates that the date is March 29.

Ugh, none of this makes sense.

Ziggy 2.0 says there’s this movie called “Primer” that you should really see.

Al, I invented time travel. I don’t need a sci-fi movie to explain it to me.

That sci-fi movie is a lot more consistent than we are.

That’s a fair point, we kind of make things up as we go along.

Remember that time you leapt into a monkey?

It was a chimp but, yeah, that was real dumb.

Because of you I got to see a monkey use a gun, so it was all worth it.

A chimp. You got to see a chimp use a gun.

Same difference to me!

I gotta go get ready for this game. Keep looking into March 29…

…find out why clinching the playoffs won’t let me leap out this time around.

This is time travel and we’re all kind of making this up as we go along.

YOU BETTER PICK ME OR I’LL DESTROY YOU!

I AM NOT CALMING DOWN.

But Jason has been here all along and–

ARE YOU EVEN LISTENING TO ME YOU SKINNY BRAT?

Tony Allen is yelling at me and I still don’t know what I’m doing wrong.

I don’t even know what “renounce” means.

It comes from the Latin word “reno”, which meant a fur cloak, specifically made from deerskin.

So he wants you to place a deerskin garment on Jason Richardon’s back.

Thaddeus! How long have you been there? And why weren’t you helping me?

I was busy with my ancient language studies, dawg. Clearly.

Everyone just calm down. Tony, what the hell are you doing bullying Nerlens like that?

Motherfucker needs to make a decision about who he is going to support.

Come to think of it, so do you. Me or Jason?

…and he’s trying to drum up popular support.

Huh, I wonder where he could have gotten that idea.

Maybe I told him our team was coached democratically.

I already got Thaddeus’s support, but I know Carter-Williams is leaning towards Richardson.

He’ll be on your side if you’re good at ganking.

I don’t know what that is.

Then you’re on your own with him.

This means the decision is going to be up to you and Nerlens, Beckett.

No, this decision is up to coach Brown.

If the team made calls on playing time, I would have been a starter a lot earlier.

Eh, I don’t know about that Beckett…

You’re kind of weird and we’re all tired of explaining the internet to you.

Hey, if a Nigerian prince was offering you several million dollars you’d have questions too.

Damn, Beckett, you’re kind of an idiot for the son of a legendary physicist.

We need to stop fighting. We’re one win away from clinching the playoffs.

This is not the time!

A decision’s gotta be made. Me or Richardson. Who’s gonna be the sixth man?

Neither of you! Because you’re both shooting guards.

And right now I’m getting the most minutes on the team.

Yeah, what we really need is a backup center because I’m really tired you guys.

I think we’re all in agreement that trade made literally no sense.

Unless the GM wanted to mess with our team chemistry, yeah, it was pretty silly.

You’re both ignoring that I’m better than Jason this year.

Which is why you should vote for me.

We don’t vote on playing time!

All right, kids, time to vote on who backs up Beckett and Turner!

Coach, this is a terrible idea. Voting between Allen and Richardson?

You’re turning the team against each other on the morning before the biggest game of the year.

Yes, and whoever survives will be stronger for it.

Don’t we need teamwork to succeed?

Overrated. We need baskets and steals and rebounds.

Whoever wins the vote will be confident. Whoever loses will be hungry.

You ever heard of social darwinism, Beckett?

Didn’t that fall out of favor with the Nazis?

Woah, let’s not start throwing around The N word.

And I’m not here to have linguistics debates with you.

If you’re going to have this attitude, I have a book you need to read.

Is it Atlas Shrugged?

Is it The Fountainhead?

Before we go any further, I think I need to know your thoughts on Lamarckism.

Hey, let’s not throw the baby out with the bathwater.

Just go back to the locker room.

We’re going to hold this vote and that’s final.

Congratulations to Tony Allen, the winner of the first annual 76ers vote for playing time.

You’re going to do this annually?

Well, congratulations on being a role player instead of a bench warmer, I guess.

Role player? Does this mean he has to pretend to be an elf?

Yes, Nerlens, that is exactly what this means.

I want to take a look at the votes. I want to see who betrayed me.

So it’s a great idea!

Let’s see, both of you voted for yourselves.

HEY! I’m trying to keep this team together.

Nerlens voted for Tony, and Evan for something called a “Jakiro”.

Which makes no sense so it shouldn’t count.

That obviously meant me! So the voting should have been tied.

And we should all be glaring at Beckett to make a decision.

If he had meant to write “Jason” he would have written that.

No, he wouldn’t have. He calls us all by weird names.

The decision is made. Now go out there and give us a win.

You’re not leaping out.

So you were right. In the second timeline, making the playoffs was all I needed to do…

But now there’s something else.

Let’s see just how important that big Allen/Richardson decision was:

Neither of us scored any points.

Well I had an assist, and you turned the ball over the one time you tried to shoot.

At least I tried to shoot!

Yeah, all that good it did you.

Beckett really did carry us after all.

Our feud was totally pointless.

Pointless in more way than one.

Finally! Now can we celebrate clinching the playoffs?

See, it all worked out after all.

…not because it was a good idea.

Maybe we’ll sign Lance Stephenson in the offseason and we’ll try it again with you two.

So that was a big waste of time.

Tell me about it.

Though I guess it’s a good sign that the 76ers worst problem is a feud on the bench.

Unfortunately, that’s not your worst problem.

Do you really think we could lose on March 29?

We haven’t lost a game for over a month.

We can’t be sure it’s all about winning.

If all you had to do was win, you’d be well on your way.

Look at your damn stats.

So you think something else is going to happen?

Ever since a few weeks ago, Jackson Ellis has been playing a lot better.

Think about it, Sam. What was I saying before?

We don’t remember the second timeline–the one where clinching the playoffs lets you leap.

Which means that another time traveler has affected it the way that I do for everyone else.

But we only know one time traveler…

What are you saying?

I’m saying that I think I’ve figured out what’s going on:

A future version of yourself has leapt into Jackson Ellis. 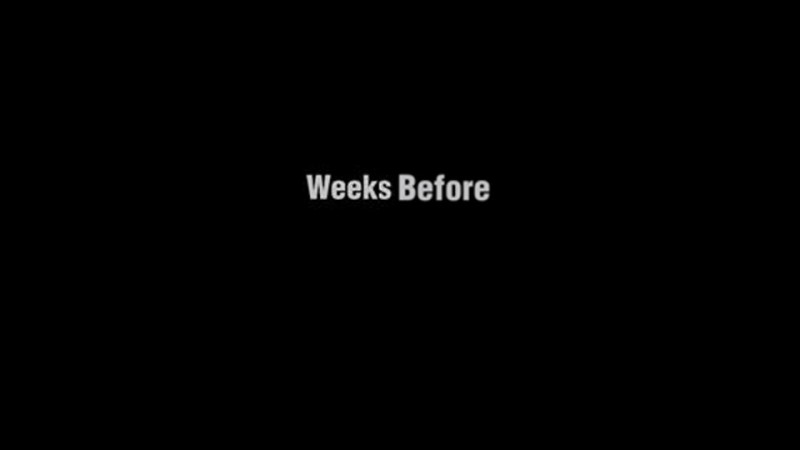 And maybe I’ll do it.

You’ll regret this, Ellis. Come March 29, you won’t have this choice.

Think about it, Jackson. How long have we known each other?

Since the pre-draft workouts. You helped me elevate my game.

And since then, have you ever seen me talk to anyone else?

Did I do that myself, or have you deliver the message?

I talked to him on your behalf. I owed you for everything you taught me.

C’mon, Ellis, you can figure this out on your own.

Are you, uh, a werewolf like Jacob Black? And it’s been a full moon for almost a full year?

Are you a parasitic being like Wanderer in Stephanie Meyer’s The Host?

Damn it! But so did you!

Seriously though explain yourself.

I leapt into your body when all this began.

I’ve been at this for decades now, and I have learned to share the consciousness of my host body.

Rather than take over your body, I can appear to you and transfer some of my skills.

That’s right, Ellis, and if you don’t do what I say…

…we can do this old school, and I can take you over completely.

So, that’s your plan…

But what is going to happen on March 29?

With your help, or without it…